Bauchelain and Korbal Broach: Volume One: Three Short Novels of the Malazan Empire (Malazan Book of the Fallen) (Paperback) 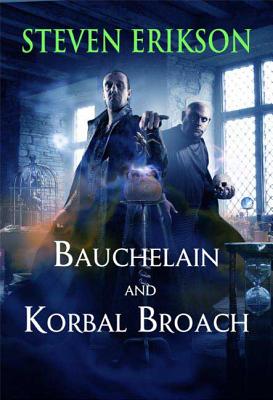 Bauchelain and Korbal Broach: Volume One: Three Short Novels of the Malazan Empire (Malazan Book of the Fallen) (Paperback)

The first three tales of Bauchelain and Korbal Broach, the famed necromancers from the Malazan Book of the Fallen, collected in one volume.

BLOOD FOLLOWS
In the port city of Lamentable Moll, a diabolical killer stalks the streets and panic grips the citizens like a fever. As Emancipor Reese's legendary ill luck would have it, his previous employer is the unknown killer's latest victim. But two strangers have come to town and they have posted in Fishmonger's Round a note, reeking of death-warded magic, requesting the services of a manservant...

THE HEALTHY DEAD
The city of Quaint's zeal for goodness can be catastophic, and no one knows this better than Bauchelain and Korbal Broach, two stalwart champions of all things bad.The homicidal necromancers - and their substance-addled manservant, Emancipor Reese - find themeselves ensnared in a scheme to bring goodness into utter ruination. Sometimes you must bring down civilization...in the name of civilization.

THE LEES OF LAUGHTER'S END
After their blissful sojourn in Lamentable Moll, the sorcerors Bauchelain and Korbal Broach - along with their manservant, Emancipor Reese -set out on the open seas aboard the sturdy ship Suncurl. Alas, there's more baggage in the hold than meets the beady eyes of the crew, and unseemly terrors awaken. For Bauchelain, Korbal Broach and Emancipor Reese, it is just one more night on the high seas, on a journey without end.

Steven Erikson is an archaeologist and anthropologist and a graduate of the Iowa Writers’ Workshop. His Malazan Book of the Fallen series, including The Crippled God, Dust of Dreams, Toll the Hounds and Reaper’s Gale, have met with widespread international acclaim and established him as a major voice in the world of fantasy fiction. The first book in the series, Gardens of the Moon, was shortlisted for a World Fantasy Award. The second novel, Deadhouse Gates, was voted one of the ten best fantasy novels of 2000 by SF Site. He lives in Canada.
"This collection of edgy and violent narratives tied to Erikson's Malazon Empire series pushes the boundaries of epic fantasy with morally ambiguous protagonists, bloody altercations and gritty world-building." —Publishers Weekly