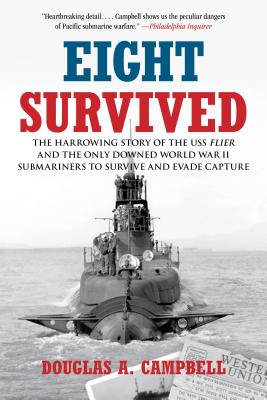 By Douglas A. Campbell


Email or call for price
The incredible wartime saga of the only American submariners to survive the sinking of their ship and evade enemy capture in WWII On the night of August 13, 1944, the U.S. submarine Flier struck a mine in the Sulu Sea in the southern Philippines as it steamed along the surface. All but fifteen of the more than eighty-strong crew went down with the vessel. Of those left floating in the dark, eight survived by swimming for seventeen hours before washing ashore on an uninhabited island. The story of the Flier and its eight survivors is wholly unique in the annals of U.S. military history. Eight Survived tells the gripping story of the doomed submarine and its crew from its first patrol, during which it sank several enemy ships, to the explosion in the Sulu Sea. Drawing on interviews with the survivors and on a visit to the jungle where they washed ashore--where a cast of fascinating characters helped the U.S. sailors evade the Japanese--Douglas Campbell fully captures the combination of extraordinary courage and luck that marked one of the most heroic episodes of World War II.
Douglas A. Campbell is the author of The Sea's Bitter Harvest: Thirteen Deadly Days on the North Atlantic. Previously a longtime reporter for the Philadelphia Inquirer, he writes for Soundings magazine.

"[A] highly emotional account of the brief life of the USS Flier . . . heartbreaking detail . . . [T]here is more to Campbell's story than the ordeal of these eight men. . . . Campbell puts the rescue into a larger context. We get mostly untold stories of Muslim resistance fighters and American missionaries living in the Philippines, and one surprising account of an American soldier of Philippine descent. . . . Campbell also shows us the peculiar dangers of Pacific submarine warfare." --Bill Kent, Philadelphia Inquirer