Cyclist's Manifesto: The Case for Riding on Two Wheels Instead of Four (Falcon Guide) (Paperback) 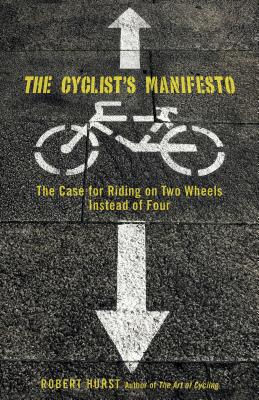 Cyclist's Manifesto: The Case for Riding on Two Wheels Instead of Four (Falcon Guide) (Paperback)


Email or call for price
The Cyclist's Manifesto makes the most powerful case to date for a simple fact: America can no longer afford to ignore the bicycle as a tool for serious transportation. Robert Hurst takes off his gloves to lay out the case in favor of the bicycle as today's superior mode of transport--and to voice a resounding call to action for people to use it. In an engaging narrative that takes us from the past to the present and into the future, the author visits a surprising variety of places and historical moments. Hurst argues that America's aversion to bicycling for transportation is a unique historical-cultural absurdity based largely on false assumptions and bad information. Humorous but more than a little exasperated, and strikingly nonpartisan, The Cyclist's Manifesto paints a tantalizing picture of just what the effects of substantially increased bicycle usage might be--the health care savings would be astronomical, for example--and the ways that individuals and governments can go about wresting back control over their energy destiny.
Robert Hurst, a veteran bicycle messenger who has cycled nearly 200,000 miles and 20,000 hours in heavy traffic, is a student of history and the author of several FalconGuides, including The Bicycle Commuter's Pocket Guide and The Art of Cycling.

"Author Robert Hurst delivers a vigorous forehead slap to America in this feisty manifesto for the age of 'Peak Oil."

Praise for Robert Hurst's The Art of Cycling: "Robert Hurst succeeds in writing about urban cycling the way that Rachel Carson triumphed with Silent Spring, the seminal work whose publication spawned Earth Day, the Environmental Protection Agency, consumer recycling, and how we look at the world." "This empowering cycling book should come in the glove box of every new car sold" -- Marla Streb, World Champion Downhill Mountain Bike Racer

"While it's hard to imagine a book about [urban] cycling could fill over 250 pages, let alone strive to be a near masterpiece, that's just what The Art of Urban Cycling: Lessons from the Street, and all-encompassing how-to book by veteran bicycling messenger Robert Hurst, has accomplished." "With a spot-on foreword written by Luna downhiller Marla Streb and a detailed index of footnotes and bibliography, Hurst has compiled a cerebral but hip manifesto for [urban] cyclists looking to coexist in a system that has left them to fend for their lives."  -- VeloNews, Journal of Competitive Cycling

"I would like to highly recommend the book "The Art of Urban Cycling: Lessons from the Street" by Robert Hurst. Not only is it delightfully written (with a sense of humour and a relaxed style) and absorbing ("just a second, dear, I'll take out the trash after I read about curbs"), but it's *dead on*. I've been riding my whole life, never having owned a car, to get everywhere from school to grocery shopping to Canada. And he's *right*. Katherine Stange, Providence, RI (Amazon review)