Inspired Origami: Projects to Calm the Mind and Soothe the Soul (Hardcover) 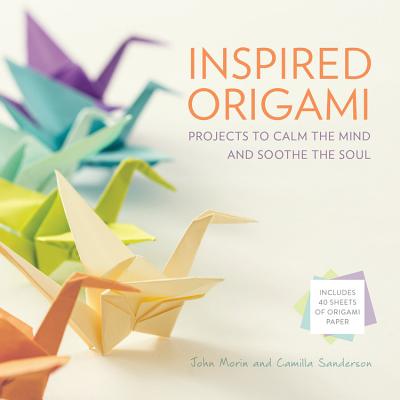 Inspired Origami: Projects to Calm the Mind and Soothe the Soul (Hardcover)


Email or call for price
Perfect for fans of mindful activity books, Inspired Origami teaches readers the beautiful art of paper folding, with 15 projects and 36 sheets of origami paper.


Inspired Origami will show readers how the peaceful pastime of creating papercraft art can calm the minds of crafters of all skill levels. The book features an introduction on achieving mindfulness through origami, a history of the craft, basic rules, and all the information needed to get started. The introductory material is followed by step-by-step instruction and illustrations that walk the reader through beautiful projects, including the Swan, Windmill, Sailboat, Peace Crane, and more. Including 36 distinct sheets of origami paper in both solid colors and patterns, Inspired Origami provides all that's necessary to begin the therapeutic craft of creating accessible, stunning works of art.

Camilla Sanderson has practiced meditation for more than thirty years. After studying world religions for two years, she was ordained an interfaith minister in 2014. She is the author of The Mini Book of Mindfulness (2016). Camilla is an Australian by birth and lives in New Hampshire.
John Morin has been practicing origami since the age of nine. He has created numerous origami models and has been active within the Origami Club of Pittsburgh. Currently, John lives in Pittsburgh and works as a software engineer.