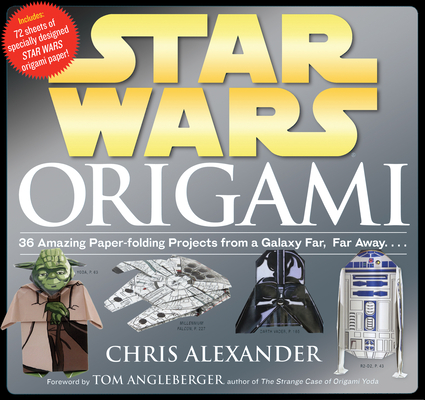 By Chris Alexander (By (artist)), Tom Angleberger (Foreword by)

Out of Print
Kids love origami—and what could be cooler than transforming a piece of paper into Boba Fett, Princess Leia, Yoda, or R2-D2? And not just any paper, but custom-designed paper illustrated with art from the movies. Star Wars® Origami marries the fun of paper folding with the obsession of Star Wars. Like The Joy of Origami and Origami on the Go, this book puts an original spin on an ancient art. And like Star Wars® Scanimation® and Star Wars® Fandex®, it’s a fresh take on Star Wars mania.

Chris Alexander is a master folder and founder of the popular website StarWarsOrigami.com, and here are 36 models, clearly explained, that range in difficulty from Youngling (easy) to Padawan (medium), Jedi Knight (difficult), and Jedi Master (tricky!). A front section introduces origami definitions and basic folds. Bound in the back is the book’s unique folding paper, two sheets for each figure. Illustrated with original art, it makes each creation—the essential lightsabers, the Death Star, and much more—true to the movies.

Star Wars Origami includes a foreword by Tom Angleberger, author of the New York Times bestsellers The Strange Case of Origami Yoda and Darth Paper Strikes Back, and is scheduled to be published at the same time as Angleberger’s upcoming book, The Secret of the Fortune Wookiee.
Chris Alexander began doing origami at the age of four. Since then he’s created dozens of original designs, many of them Star Wars themed. He has a large Star Wars fan base and tours the country folding at conventions and museums. He lives in Lancaster, California.