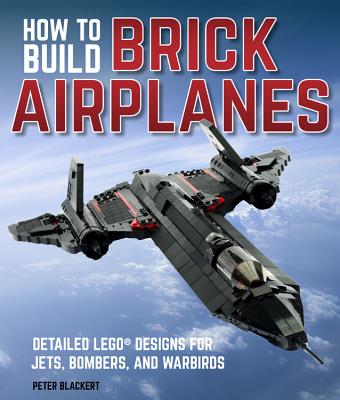 
Usually Ships in 1-5 Days
How to Build Brick Airplanes puts the power of the world's most fearsome jets in your hands—learn how to build the SR-71, the P38 Lightning, the B2 bomber, and more, from LEGO bricks.

Grab some bricks, because it's time to get building! How to Build Brick Airplanes is loaded with clear, easy-to-follow designs for creating contemporary and classic jets, warbirds, bombers, and more using nothing more than bricks found in many common LEGO sets. More than just simple, generic recreations, the planes here are all scale models of their real-world counterparts.

How to Build Brick Airplanes opens with simpler designs, before working up to more detailed builds. This vivid, user-friendly, and fun title is sure to bring hours of joy and airborne wonder to LEGO fans across the globe, whether you're an aviation enthusiast, LEGO lover, or looking for a project to share with little ones of your own.

LEGO is the world's #1 toy company. The adults who grew up building LEGO City and Spaceports are now passing their old sets on to their children—and a new generation of LEGO builders has emerged, along with a rabid online community and celebrated custom builders.

Peter Blackert is the most prolific vehicle builder in the LEGO community. He has built thousands of cars from LEGO over the years, drawing on his experience as a Powertrain & Chassis Systems Engineering Architect for the Ford Motor Company. His Bugatti Veyron, featured in his first Motorbooks title How to Build Brick Cars, was listed #5 in TopGear magazine's “Ten Greatest Replica Lego Cars” in 2014. His work has also featured regularly in articles on LEGO fan sites, such as brothers-brick.com and TheLegoCarBlog.com, and car-club magazines. Peter's work can be found on Flickr under the username lego911, and on Instagram under lego__911. His second Motorbooks title How to Build Brick Airplanes published in 2018. He lives near the beach in Australia with his wife and three kids, and a large room full of LEGO bricks.