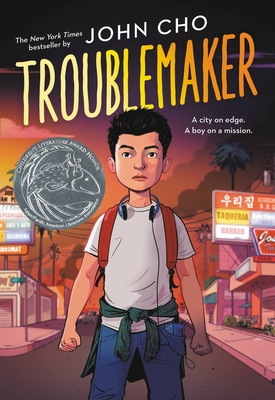 Troublemaker follows the events of the LA Riots through the eyes of 12-year-old Jordan as he navigates school and family. This book will highlight the unique Korean American perspective.

12-year-old Jordan feels like he can't live up to the example his older sister set, or his parent's expectations. When he returns home from school one day hoping to hide his suspension, Los Angeles has reached a turning point. In the wake of the acquittal of the police officers filmed beating Rodney King, as well as the shooting of a young black teen, Latasha Harlins by a Korean store owner, the country is at the precipice of confronting its racist past and present.

As tensions escalate, Jordan's father leaves to check on the family store, spurring Jordan and his friends to embark on a dangerous journey to come to his aide, and come to terms with the racism within and affecting their community.

John Cho is known as Harold from Harold & Kumar, Hikaru Sulu from J.J. Abrams’s Star Trek, or as the star of the highly anticipated live-action Netflix series, Cowboy Bebop, based on the worldwide cult anime phenomenon (news of which “broke the Internet,” to quote Vanity Fair).  John is also a former 7th-grade English teacher who grew up as a Korean immigrant kid in Texas and East L.A. (among many other places). He is also now a proud father, with his Japanese-American wife Kerri, of two beautiful children — a 9-year-old daughter and an 11-year-old boy — who love to read.


“A heartfelt, insightful book exploring the bond between father and son who deepen their relationship while navigating social justice, police bias, Korean American identity, and the trauma of the L.A. riots.—Jewell Parker Rhodes, bestselling author of Ghost Boys and Paradise on Fire

“A compelling story in a vivid setting that has not been explored enough in books for young readers. Jordan is a genuine, flawed character so real you can't help rooting for him. Deep appreciation to authors John Cho and Sarah Suk for writing this much-needed book.”—Linda Sue Park, Newbery Medalist and NYTimes bestselling author

“An action-packed adventure that will not only quicken your pulse but make you think deeply about friendship, family, and justice.” —Nicola Yoon, #1 New York Times bestselling author of The Sun Is Also A Star and Instructions for Dancing

“Fast-paced yet thoughtful and profound, TROUBLEMAKER revisits the fires of the past to shine light and wisdom for a better future.” —David Yoon, New York Times bestselling author of Frankly In Love

“At its core, Troublemaker is a deeply moving story of redemption between a 12-year-old Korean American rebellious son and his strict storeowner father, set against the prescient backdrop of a riveting and suspenseful journey into the heart of 1992 Los Angeles’ Koreatown on the first night of what would become one of our country’s most iconic movements of civil unrest.”—Paula Yoo, award-winning author of From a Whisper to a Rallying Cry: The Killing of Vincent Chin and the Trial that Galvanized the Asian American Movement

*"This debut middle-grade novel by Cho, well known for his acting work, achieves a complexity of theme that is welcome for this audience. It’s an important, even profound, story, yet related with a light touch. Jordan’s journey will have readers following right alongside him as he navigates the vicissitudes of his moment in history and his place in a family."—Horn Book, starred review

" Readers drawn to action will revel in close calls and high emotions generated by Jordan's conflicts with family and friends."—Booklist