The Dark Tower V: Wolves of the Calla (CD-Audio) 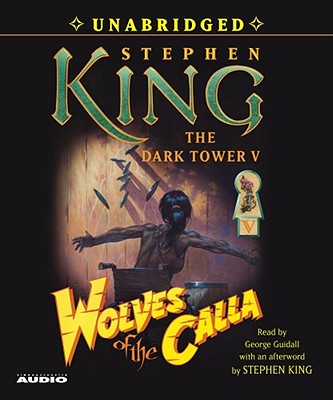 The Dark Tower V: Wolves of the Calla (CD-Audio)

This is book number 5 in the The Dark Tower series.

Wolves of the Calla is the thrilling fifth book in Stephen King’s Dark Tower series—a unique bestselling epic fantasy quest inspired many years ago by The Lord of the Rings.

In the extraordinary fifth novel in Stephen King’s remarkable fantasy epic, Roland Deschain and his ka-tet are bearing southeast through the forests of Mid-World. Their path takes them to the outskirts of Calla Bryn Sturgis, a tranquil valley community of farmers and ranchers on Mid-World’s borderlands.

Beyond the town, the rocky ground rises toward the hulking darkness of Thunderclap, the source of a terrible affliction that is slowly stealing the community’s soul. The Wolves of Thunderclap and their unspeakable depredation are coming. To resist them is to risk all, but these are odds the gunslingers are used to, and they can give the Calla-folken both courage and cunning. Their guns, however, will not be enough.
Stephen King is the author of more than sixty books, all of them worldwide bestsellers. His recent work includes If It Bleeds, The Institute, Elevation, The Outsider, Sleeping Beauties (cowritten with his son Owen King), and the Bill Hodges trilogy: End of Watch, Finders Keepers, and Mr. Mercedes (an Edgar Award winner for Best Novel and a television series streaming on Peacock). His novel 11/22/63 was named a top ten book of 2011 by The New York Times Book Review and won the Los Angeles Times Book Prize for Mystery/Thriller. His epic works The Dark Tower, It, Pet Sematary, and Doctor Sleep are the basis for major motion pictures, with It now the highest-grossing horror film of all time. He is the recipient of the 2020 Audio Publishers Association Lifetime Achievement Award, the 2018 PEN America Literary Service Award, the 2014 National Medal of Arts, and the 2003 National Book Foundation Medal for Distinguished Contribution to American Letters. He lives in Bangor, Maine, with his wife, novelist Tabitha King.

LOCUS Wolves of the Calla is one of the strongest entries yet in what will surely be a master storyteller's magnum opus.

The San Francisco Chronicle One gets the feeling that this colossal story means a lot to King, that he's telling it because he has to....he's giving "The Dark Tower" everything he's got.

The Philadelphia Inquirer The man can spin a yarn, and a great one at that.

People The master of the macabre....[King] is still quite the entertainer

The Atlanta Journal-Constitution An impressive work of mythic magnitude. May turn out to be Stephen King's greatest literary achievement.

The Kansas City Star It works because King, despite his long resume, keeps insisting on surprising himself and, in so doing, surprising us.

The Denver Post Brilliant in technique and ability...Feed your head! Now dig in, 'cause King's latest in this seven-course banquet...is a lip-smacking, brain-filling repast.

Bangor Daily News "The Dark Tower" is King's masterpiece....Wolves of the Calla succeeds as a standalone work.