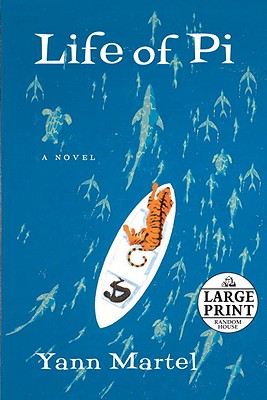 "The Jungle Book "meets "Not Wanted On the Voyage" in a triumph of storytelling and originality: a novel, as one character puts it, to make you believe in God.
Piscine Molitor Patel, nicknamed Pi, lives in Pondicherry, India, where his family runs a zoo. Little Pi is a great reader. He devours books on Hinduism, Christianity and Islam, and to the surprise of his secular parents, becomes devoted to all three religions. When the parents decide to emigrate to Canada, the family boards a cargo ship with many of the animals that are going to new zoological homes in North America, and bravely sets sail for the New World.
Alas, the ship sinks. A solitary lifeboat remains bobbing on the surface of the wild blue Pacific. In it are five survivors: Pi, a hyena, a zebra, an orang-utan and a 450-pound Royal Bengal tiger.
With intelligence, daring and inexpressible fear, Pi manages to keep his wits about him as the animals begin to assert their places in the foodchain; it is the tiger, Richard Parker, with whom he must develop an inviolable understanding.
Yann Martel's "Life of Pi" is a transformative novel: a book to delight in, to talk about and treasure. It will convince the most jaded among us and remind the rest that something grander is afoot in our lives than we may have realized.

"From the Hardcover edition.

Yann Martel was born in Spain in 1963. After studying philosophy at university, he worked odd jobs and traveled before turning to writing at the age of twenty-six. He is the author of the internationally acclaimed 2002 Man Booker Prize winning novel "Life of Pi," which was translated into thirty-eight languages and spent fifty-seven weeks on the "New York Times" bestseller list. Yann Martel lives in Saskatchewan, Canada.

"From the Hardcover edition.""