God vs. Government: Taking a Biblical Stand When Christ and Compliance Collide (Paperback) 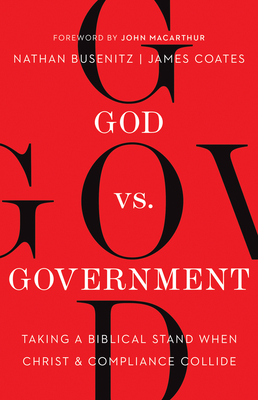 God vs. Government: Taking a Biblical Stand When Christ and Compliance Collide (Paperback)


Usually Ships in 1-5 Days
"Welcome to our peaceful protest." In the spring of 2020, government mandates forced churches across North America to close their doors in response to the COVID-19 pandemic. As societal fear and unrest increased, Christians were forced to grapple with how God wanted them to respond to these state-imposed restrictions. After all, didn't the closure of churches pose a serious threat in a time when people needed spiritual direction more than ever? God vs. Government follows two churches' courageous decisions to reopen despite orders to remain closed. Guided by the command in Hebrews 10:25 that churches not forsake meeting together, pastors John MacArthur and James Coates led their congregations to return to in-person meetings--and were swiftly met by unsympathetic governing authorities ready to shut them down again. The ensuing legal battles raised important questions about religious freedom, and more importantly, illuminated what it looks like to take a stand when Christ and compliance collide. How do we react with wisdom and discernment when the state encroaches upon the church? God vs. Government tells two incredible accounts that affirm our need to be faithful to the Lord's commands no matter the circumstances.
Nathan Busenitz is the executive vice president and provost of The Master's Seminary in Los Angeles. He also serves as part of the pastoral staff at Grace Community Church and has written or contributed to numerous books, including Right Thinking in a World Gone Wrong. He and his wife, Beth, have four children. James Coates is the pastor-teacher of GraceLife Church of Edmonton, Canada. He graduated with MDiv and DMin degrees from The Master's Seminary. He and his wife, Erin, have two sons.