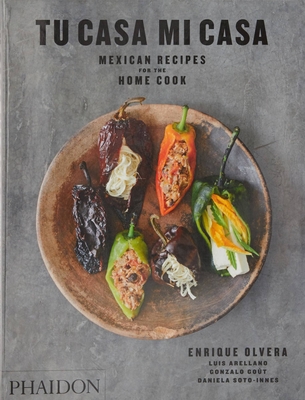 Enrique Olvera is a leading talent on the gastronomic stage, reinventing the cuisine of his native Mexico to global acclaim – yet his true passion is Mexican home cooking. Tu Casa Mi Casa is Mexico City/New York-based Olvera's ode to the kitchens of his homeland. He shares 100 of the recipes close to his heart – the core collection of basic Mexican dishes – and encourages readers everywhere to incorporate traditional and contemporary Mexican tastes and ingredients into their recipe repertoire, no matter how far they live from Mexico.

"An ode to the kitchens of his homeland, the book teaches readers how to incorporate traditional and contemporary Mexican ingredients into their recipe repertoire, no matter where they live."—Epicurious

"With the hand of an exceptional photographer, Olvera leads us through every corner of Mexico where the most remarkable recipes are formed."—L'Officiel Mexico

"We've made it [Chicken Tinga] and it really is very easy."—London On The Inside

"Enrique Olvera's new cookbook is... An homage to good Mexican home cooking... If you're looking to incorporate traditional and contemporary Mexican flavors into your regular recipe repertoire, this is the cookbook for you."—Eater, Best New Cookbooks for Spring

"Tu Casa Mi Casa encourages readers everywhere to incorporate traditional and contemporary Mexican tastes and ingredients into their recipe repertoire, no matter how far they live from Mexico."—Edible Hawaiian Islands

"Olvera and co. focus on recipes for the foundations of Mexican cooking... with bright and simple photos of each to guide you along the way."—Grub Street

"Chef Enrique Olvera may be a world-leading chef - reinventing dishes from his native Mexico to an international scale, but his ultimate calling is Mexican home cooking... [The book] offers an appreciation of a cuisine that has traditional roots combined with a contemporary outlook."—Wallpaper* Online

"...Filled with 100 accessible recipes that will help you learn the building block techniques and ingredients in Mexican cuisine."—Robb Report

"...A trip deep into Mexico and its colourful ingredients and vibrant flavours."—Vancouver Sun

"Author Enrique Olvera is a revered Mexian chef and restauranteur, but this recipe collection is all about traditional Mexican home-cooking - and the dishes are stunning, as well as [mostly] easy to prepare. Plenty of background about ingredients, regional dishes and food history too."—Delicious magazine

"Bring the complex flavours of Mexican cooking into your kitchen."—Foodism online

"Enrique Olvera... is the voice whispering encouragements as you make tamales, chilaquiles and chicken tinga at home."—The New York Times

"From tacos, tortillas and tamales to chipotle chilli and chocolate mole - a new cookbook will make you go loco for Latin American food."—The Sunday Times (Ireland)

"Bring the heat to your next dinner party..."—Wanderlust

"In his second English-language book, Tu Casa Mi Casa (Phaidon, 2019), Olvera explores the foundation of all that he does: Mexican home cooking."—National Post

"It covers everything... A fiesta for the senses."—The Lady

"Within days [of purchase], Tu Casa Mi Casa became my most sauce-splattered, dog-eared cookbook. It's full of deeply comforting recipes like Chicken Tinga and Crispy Potato and Quesillo Flautas, which are so soothing to eat that they're like having Jim Dale whisper-read Harry Potter directly into your ear."—Grub Street