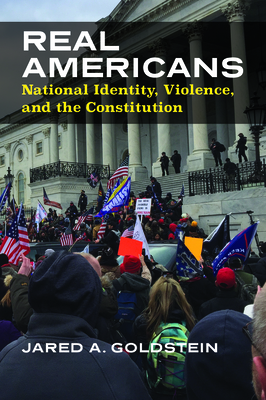 
Usually Ships in 1-5 Days
On January 6, 2021, white supremacists, Christian nationalists, and other supporters of President Donald Trump stormed the US Capitol in an attempt to overturn the results of the 2020 presidential election. The insurrection was widely denounced as an attack on the Constitution, and the subsequent impeachment trial was framed as a defense of constitutional government. What received little attention is that the January 6 insurrectionists themselves justified the violence they perpetrated as a defense of the Constitution; after battling the Capitol police and breaking doors and windows, the mob marched inside, chanting "Defend your liberty, defend the Constitution." In Real Americans: National Identity, Violence, and the Constitution Jared A. Goldstein boldly challenges the conventional wisdom that a shared devotion to the Constitution is the essence of what it means to be American. In his careful analysis of US history, Goldstein demonstrates the well-established pattern of movements devoted to defending the power of dominant racial, ethnic, and religious groups that deploy the rhetoric of constitutional devotion to express their national visions and justify their violence. Goldstein describes this as constitutional nationalism, an ideology that defines being an American as standing with, and by, the Constitution. This history includes the Ku Klux Klan's self-declared mission to "protect and defend the Constitution of the United States," which served to justify its campaign of violence in the 1860s and 1870s to prevent Black people from exercising the right to vote; Protestant Americans who felt threatened by the growing population of Catholics and Jews and organized mass movements to defend their status and power by declaring that the Constitution was made for a Protestant nation; native-born Americans who resisted the rising population of immigrants and who mobilized to exclude the newcomers and their alien ideas; corporate leaders arguing that regulation is unconstitutional and un-American; and Timothy McVeigh, who believed he was defending the Constitution by killing 168 people with a truck bomb. Real Americans: National Identity, Violence, and the Constitution reveals how the Constitution as the central embodiment and common ground of American identity has long been used to promote conflicting versions of American identity and to justify hatred, violence, and exclusion.