Waiter to the Rich and Shameless: Confessions of a Five-Star Beverly Hills Server (Paperback) 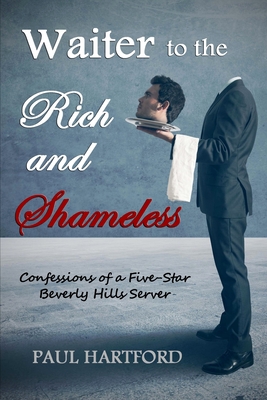 A down-and-out musician chops off his hair to become a server at the top of the Hollywood food chain, discovering a cloistered world of money, fame, bad behavior and intrigue. Waiter to the Rich and Shameless is not just a peek into the secretive inner workings of a legendary five-star restaurant; it is not just a celebrity tell-all or a scathing corporate analysis. It is a top-tier waiter's personal coming-of-age story, an intimate look into the complicated challenges of serving in the country's most elite, Hollywood-centric dining room while fighting to maintain a sense of self and purpose.

Paul Hartford's work experience includes nearly twenty-three years in the high-profile service industry, catering to topline clients in various exclusive establishments. Before his decade of service in the iconic Cricket Room, he worked in the executive dining room of a major Hollywood movie studio and spent several years as a bartender in an elite downtown nightclub. His service career started when, as a seventeen year-old he managed to con his way into a waiter position at the Holiday Inn near Wellesley, MA by posing as an eighteen year-old. Later, as a waiter at the infamous Division Sixteen in Boston, he had to help carry Steven Tyler out of the bathroom where he had shot up and was too high to open the door or walk out on his own. This was during the time when Tyler and Joe Perry were supposedly sober and hosting alcohol-related public service announcements on local TV stations. Later in Boston, Hartford was the head waiter at the ever-trendy 29 Newbury. He is also a noted musician and vocalist who has performed in Europe, Asia and America. He has written over 100 songs and has licensing deals with several TV shows. When he was first signed to a music production company in Miami, he had to supplement his income by working at the Village Inn where he remembers serving customers such as Andy Garcia and Kelly MacGillis. Paul is currently writing his second screenplay as well as a pilot based on his book, Waiter to the Rich and Shameless.