9/11 Overlooked Facts: How the Carnage was Carried Out (Paperback) 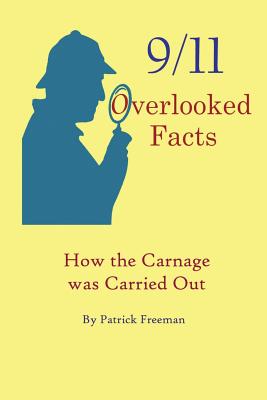 9/11 Overlooked Facts: How the Carnage was Carried Out (Paperback)

The various books and articles on 9/11 issues that I researched were mainly repeats of a variety of theories.

It is an indication of a lack of understanding of a plain basic technical logical analysis of the observed facts. There was mainly an out of touch type theorization driven more by emotion than logic.

"9/11 Overlooked Facts" is absolutely different. Its original details and logical deductions are written with a Sherlock Holmes like observant mindset.

Sir Arthur Conan Doyle wrote: "Crime is common. Logic is rare. Therefore it is upon the logic rather than upon the crime that you should dwell."

A simple fact is that the destruction of the World Trade Center complex and the crash at the Pentagon on September 11, 2001 were not accidents. It was carnage of monumental proportions

I studied Arthur Conan Doyle's master detective character Sherlock Holmes' approach to crime solving. I used some of his quotes and principles to analyze the known and unseen facts of the 9/11 events. I discovered various unusual vital details of which I gave my analysis with logical deductions.

I detailed that the planes in all the events were irrelevant in the actual destruction. They were distracting fireworks displays.

The complex plots by nature had encountered unanticipated events and consequently even blunders emerged".

Look for example at the photograph and description of a fireman working at the contended "C-Ring" wall opening into the A-E Drive at the Pentagon. You can see the equipment he was using; an air-chisel and masonry saw to make the cut-out of the hole. No plane had ever come through this man made opening.

I evaluated the videos and images and detailed that an unknown technology was used that wiped out the Twin Towers. A simple analysis established that only this single uncharted energy technology could produce the fast disappearence rate of the Twin Tower floors and answer all questions about many of the strange events that happened during and after the destruction of the World Trade Center complex. It made all other suggested methods pointless.

Let the reader be the judge