Let the People Rule: How Direct Democracy Can Meet the Populist Challenge (Paperback) 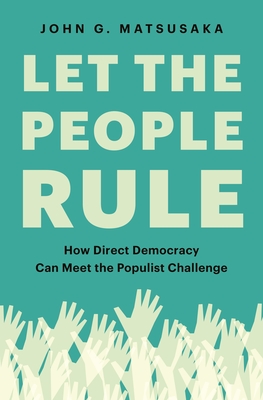 Let the People Rule: How Direct Democracy Can Meet the Populist Challenge (Paperback)

Propelled by the belief that government has slipped out of the hands of ordinary citizens, a surging wave of populism is destabilizing democracies around the world. As John Matsusaka reveals in Let the People Rule, this belief is based in fact. Over the past century, while democratic governments have become more efficient, they have also become more disconnected from the people they purport to represent. The solution Matsusaka advances is familiar but surprisingly underused: direct democracy, in the form of referendums. While this might seem like a dangerous idea post-Brexit, there is a great deal of evidence that, with careful design and thoughtful implementation, referendums can help bridge the growing gulf between the government and the people. Drawing on examples from around the world, Matsusaka shows how direct democracy can bring policies back in line with the will of the people (and provide other benefits, like curbing corruption). Taking lessons from failed processes like Brexit, he also describes what issues are best suited to referendums and how they should be designed, and he tackles questions that have long vexed direct democracy: can voters be trusted to choose reasonable policies, and can minority rights survive majority decisions? The result is one of the most comprehensive examinations of direct democracy to date--coupled with concrete, nonpartisan proposals for how countries can make the most of the powerful tools that referendums offer. With a crisis of representation hobbling democracies across the globe, Let the People Rule offers important new ideas about the crucial role the referendum can play in the future of government.
John G. Matsusaka is the Charles F. Sexton Chair in American Enterprise at the Marshall School of Business and the Gould School of Law at the University of Southern California, where he also serves as executive director of the Initiative and Referendum Institute. He is the author of For the Many or the Few: The Initiative, Public Policy, and American Democracy and lives in Los Angeles.