Postcards from Absurdistan: Prague at the End of History (Hardcover) 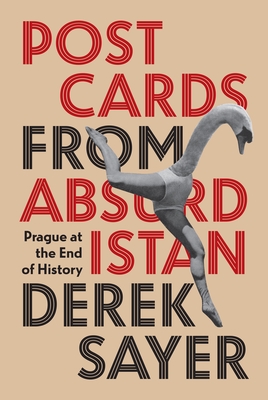 Postcards from Absurdistan: Prague at the End of History (Hardcover)

A sweeping history of a twentieth-century Prague torn between fascism, communism, and democracy--with lessons for a world again threatened by dictatorship

Postcards from Absurdistan is a cultural and political history of Prague from 1938, when the Nazis destroyed Czechoslovakia's artistically vibrant liberal democracy, to 1989, when the country's socialist regime collapsed after more than four decades of communist dictatorship. Derek Sayer shows that Prague's twentieth century, far from being a story of inexorable progress toward some "end of history," whether fascist, communist, or democratic, was a tragicomedy of recurring nightmares played out in a land Czech dissidents dubbed Absurdistan. Situated in the eye of the storms that shaped the modern world, Prague holds up an unsettling mirror to the absurdities and dangers of our own times. In a brilliant narrative, Sayer weaves a vivid montage of the lives of individual Praguers--poets and politicians, architects and athletes, journalists and filmmakers, artists, musicians, and comedians--caught up in the crosscurrents of the turbulent half century following the Nazi invasion. This is the territory of the ideologist, the collaborator, the informer, the apparatchik, the dissident, the outsider, the torturer, and the refugee--not to mention the innocent bystander who is always looking the other way and V clav Havel's greengrocer whose knowing complicity allows the show to go on. Over and over, Prague exposes modernity's dreamworlds of progress as confections of kitsch. In a time when democracy is once again under global assault, Postcards from Absurdistan is an unforgettable portrait of a city that illuminates the predicaments of the modern world.
Derek Sayer is professor emeritus and a former Canada Research Chair at the University of Alberta. His other books include the award-winning Prague, Capital of the Twentieth Century: A Surrealist History and The Coasts of Bohemia: A Czech History (both Princeton).