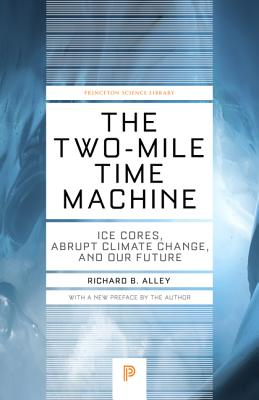 In the 1990s Richard B. Alley and his colleagues made headlines with the discovery that the last ice age came to an abrupt end over a period of only three years. In The Two-Mile Time Machine, Alley tells the fascinating history of global climate changes as revealed by reading the annual rings of ice from cores drilled in Greenland. He explains that humans have experienced an unusually temperate climate compared to the wild fluctuations that characterized most of prehistory. He warns that our comfortable environment could come to an end in a matter of years and tells us what we need to know in order to understand and perhaps overcome climate changes in the future.

In a new preface, the author weighs in on whether our understanding of global climate change has altered in the years since the book was first published, what the latest research tells us, and what he is working on next.
Richard B. Alley is the Evan Pugh Professor of Geosciences at Pennsylvania State University and a member of the National Academy of Sciences. The author of more than 240 scientific papers, he was also the host of the PBS miniseries Earth: The Operators' Manual.