Casino Moscow: A Tale of Greed and Adventure on Capitalism's Wildest Frontier (Paperback) 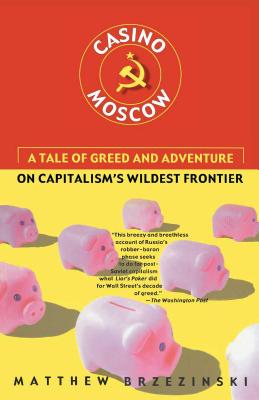 Casino Moscow: A Tale of Greed and Adventure on Capitalism's Wildest Frontier (Paperback)


Usually Ships in 1-5 Days
(This book cannot be returned.)
After awakening from its long communist slumber, Russia in the 1990s was a place where everything and everyone was for sale, and fortunes could be made and lost overnight. Into this free-market maelstrom stepped rookie Wall Street Journal reporter Matthew Brzezinski, who was immediately pulled into the mad world of Russian capitalism -- where corrupt bankers and fast-talking American carpetbaggers presided over the biggest boom and bust in financial history.
Brzezinski's adventures take him from the solid-gold bathroom fixtures of Moscow's elite, to the last stop on the Trans-Siberian railway, where poverty-stricken citizens must buy water by the pail from the local crime lord, and back to civilization, to stumble into a drunken birthday bash for an ultra-nationalist politico. It's an irreverent, lurid, and hilarious account of one man's tumultuous trek through a capitalist market gone haywire -- and a nation whose uncertain future is marked by boundless hope and foreboding despair.
Matthew Brzezinski was a staff writer for The Wall Street Journal in Kiev and Moscow from 1996 through 1998, having previously reported from Poland and other Eastern European countries for The New York Times, The Economist, The Guardian (London), and The Globe and Mail (Toronto). He is currently a freelance writer and a frequent contributor to The New York Times Magazine. He lives in Washington, D.C.
The Washington Post This breezy and breathless account of Russia's robber-baron phase seeks to do for post-Soviet capitalism what did for Wall Street's decade of greed.

The New York Times A fast-paced narrative of Russia's dalliance with bare-knuckles capitalism.

USA Today Casino Moscow is a fun romp through a wacky town...Brzezinski gives a lively account of how the New Russians chewed each other up during their early days of capitalism.