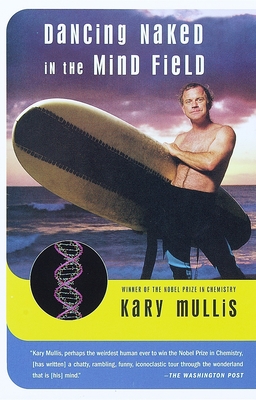 
Usually Ships in 1-5 Days
Here is a multidimensional playland of ideas from the world's most eccentric Nobel-Prize winning scientist. Kary Mullis is legendary for his invention of PCR, which redefined the world of DNA, genetics, and forensic science. He is also a surfer, a veteran of Berkeley in the sixties, and perhaps the only Nobel laureate to describe a possible encounter with aliens. A scientist of boundless curiosity, he refuses to accept any proposition based on secondhand or hearsay evidence, and always looks for the "money trail" when scientists make announcements.

Mullis writes with passion and humor about a wide range of topics: from global warming to the O. J. Simpson trial, from poisonous spiders to HIV, from scientific method to astrology. Dancing Naked in the Mind Field challenges us to question the authority of scientific dogma even as it reveals the workings of an uncannily original scientific mind.
Kary Mullis lives in La Jolla and Anderson Valley, California.

"Delightful . . . joyous . . . an autobiography of the nervous system of an extraordinary chemist."         --The New York Times Book Review

"One of the most mind-stretching and inspirational books I've read for a long time."         --Arthur C. Clarke

"Kary Mullis, perhaps the weirdest human ever to win the Nobel Prize in Chemistry, [has written] a chatty, rambling, funny, iconoclastic tour through the wonderland that is [his] mind." --The Washington Post