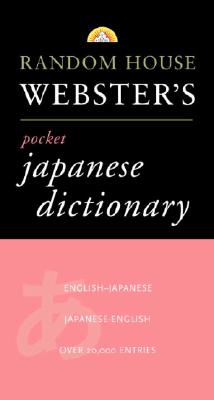 
Email or call for price
Random House Webster's Pocket Japanese Dictionary is primarily intended for two types of English-speaking users: those who have no knowledge of the language and those who have some knowledge of the language but still need a dictionary to explain grammar, words and phrases. It should prove an indispensable tool for anyone needing a bilingual dictionary that presents basic vocabulary of both languages in an accessible, easy to use format.

Includes:
Over 20,000 entries
Japanese-English, English-Japanese translations
Romanization and Japanese characters
Established in July 2013 in a merger between Penguin and Random House, Penguin Random House, with nearly 250 independent imprints and brands on five continents, more than 15,000 new titles published each year, and close to 800 million print, audio, and eBooks sold annually, is the world’s leading trade book publisher. Like its predecessor companies, Penguin Random House is committed to publishing adult and children’s fiction and nonfiction print editions and is a pioneer in digital publishing. Its publishing lists include more than 60 Nobel Prize laureates and hundreds of the world’s most widely read authors.