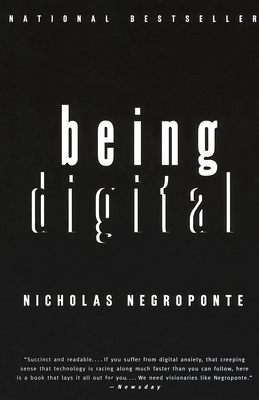 
Email or call for price
NATIONAL BESTSELLER • "Succinct and readable.... If you suffer from digital anxiety ... here is a book that lays it all out for you." --Newsday

In lively, mordantly witty prose, Negroponte decodes the mysteries--and debunks the hype--surrounding bandwidth, multimedia, virtual reality, and the Internet, and explains why such touted innovations as the fax and the CD-ROM are likely to go the way of the BetaMax.
Nicholas Negroponte is the author of the bestseller Being Digital, which has been translated into more than 40 languages. Negroponte is the co-founder of the MIT Media Lab, which he directed for its first 20 years. A graduate of MIT, Negroponte is considered a pioneer in the field of computer-aided design. He gave the first TED talk in 1984 and has given over a dozen more since. He founded the non-profit One Laptop per Child, which deployed $1 billion of laptops for primary education in the developing world.
"The finest, most understandable explanation of the digital revolution to date....Being Digital is a visionary work, written by one of this planet's masters of media."--The Christian Science Monitor

"Being Digital flows from the pen (or cursor) of a wizard who is himself helping to create the new cosmos into which we are hurtling....To read Being Digital is to enter the future it describes."--The New York Times Book Review