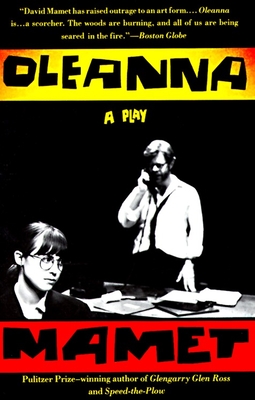 
Usually Ships in 1-5 Days
In a terrifyingly short time, a male college instructor and his female student descend from a discussion of her grades into a modern reprise of the Inquisition. Innocuous remarks suddenly turn damning. Socratic dialogue gives way to heated assault. And the relationship between a somewhat fatuous teacher and his seemingly hapless pupil turns into a fiendishly accurate X ray of the mechanisms of power, censorship, and abuse.
David Mamet is a Pulitzer Prize-winning playwright and an Academy Award-nominated screenwriter, as well as a director, novelist, poet, and essayist. He has written the screenplays for more than twenty films, including Heist, Spartan, House of Games, The Spanish Prisoner, The Winslow Boy, Wag the Dog, and the Oscar-nominated The Verdict. His more than twenty plays include Oleanna, The Cryptogram, Speed-the-Plow, American Buffalo, Sexual Perversity in Chicago, and the Pulitzer Prizewinning Glengarry Glen Ross. Born in Chicago in 1947, Mamet has taught at the Yale School of Drama, New York University, and Goddard College, and is a founding member of the Atlantic Theater Company.


"David Mamet has raised outrage to an art form. . . . Oleanna is…a scorcher. The woods are burning, and all of us are being seared in the fire.”—Boston Globe

“Wholly absorbing…a virtuoso performance…As if ripped right from the typewriter, it could not be more direct in its technique or incendiary in its ambition. . . . Oleanna is likely to provoke more arguments than any other play this year.”—The New York Times

“Our foremost master of the language of moral epilepsy.”—Newsweek