Ahead of All Parting: The Selected Poetry and Prose of Rainer Maria Rilke (Hardcover) 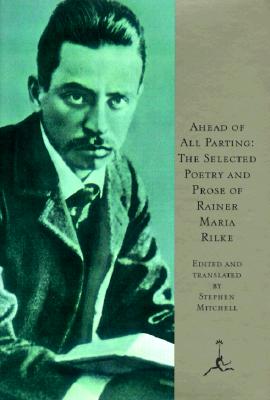 Ahead of All Parting: The Selected Poetry and Prose of Rainer Maria Rilke (Hardcover)


Email or call for price
The reputation of Rainer Maria Rilke has grown steadily since his death in 1926; today he is widely considered to be the greatest poet of the twentieth century. This Modern Library edition presents Stephen Mitchell’s acclaimed translations of Rilke, which have won praise for their re-creation of the poet’s rich formal music and depth of thought. “If Rilke had written in English,” Denis Donoghue wrote in The New York Times Book Review, “he would have written in this English.” Ahead of All Parting is an abundant selection of Rilke’s lifework. It contains representative poems from his early collections The Book of Hours and The Book of Pictures; many selections from the revolutionary New Poems, which drew inspiration from Rodin and Cezanne; the hitherto little-known “Requiem for a Friend”; and a generous selection of the late uncollected poems, which constitute some of his finest work. Included too are passages from Rilke’s influential novel, The Notebooks of Malte Laurids Brigge, and nine of his brilliant uncollected prose pieces. Finally, the book presents the poet’s two greatest masterpieces in their entirety: the Duino Elegies and The Sonnets to Orpheus. “Rilke’s voice, with its extraordinary combination of formality, power, speed and lightness, can be heard in Mr. Mitchell’s versions more clearly than in any others,” said W. S. Merwin. “His work is masterful.”
Rainer Maria Rilke (1875–1926) is one of the greatest lyric German poets. Born in Prague, he published his first book of poems, Leben und Lieber, at age nineteen. He met Lou Salomé, the talented and spirited daughter of a Russian army officer, who influenced him deeply. In 1902 he became a friend, and for a time the secretary, of Rodin, and it was during his twelve-year Paris residence that Rilke enjoyed his greatest poetic activity. In 1919 he went to Switzerland where he spent the last years of his life. It was there that he wrote his last two works, Duino Elegies (1923) and The Sonnets to Orpheus (1923).

Stephen Mitchell was born in Brooklyn in 1943 and studied at Amherst, the University of Paris, and Yale. Considered one of the preeminent translators of his generation, he has translated many classic texts including Gilgamesh, The Bhagavad Gita, Tao Te Ching, and The Book of Job.