Getting to Maybe: How the World Is Changed (Paperback) 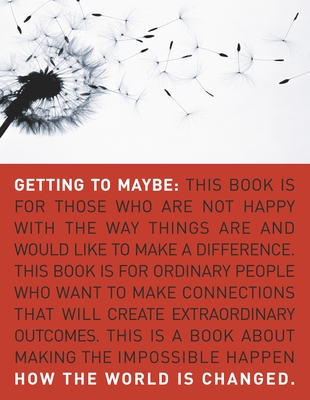 Getting to Maybe: How the World Is Changed (Paperback)

Many of us have a deep desire to make the world around us a better place. But often our good intentions are undermined by the fear that we are so insignificant in the big scheme of things that nothing we can do will actually help feed the world’s hungry, fix the damage of a Hurricane Katrina or even get a healthy lunch program up and running in the local school. We tend to think that great social change is the province of heroes – an intimidating view of reality that keeps ordinary people on the couch. But extraordinary leaders such as Gandhi and even unlikely social activists such as Bob Geldof most often see themselves as harnessing the forces around them, rather than singlehandedly setting those forces in motion. The trick in any great social project – from the global fight against AIDS to working to eradicate poverty in a single Canadian city – is to stop looking at the discrete elements and start trying to understand the complex relationships between them. By studying fascinating real-life examples of social change through this systems-and-relationships lens, the authors of Getting to Maybe tease out the rules of engagement between volunteers, leaders, organizations and circumstance – between individuals and what Shakespeare called “the tide in the affairs of men.”

Getting to Maybe applies the insights of complexity theory and harvests the experiences of a wide range of people and organizations – including the ministers behind the Boston Miracle (and its aftermath); the Grameen Bank, in which one man’s dream of micro-credit sparked a financial revolution for the world’s poor; the efforts of a Canadian clothing designer to help transform the lives of Indigenous women and children; and many more – to lay out a brand new way of thinking about making change in communities, in business, and in the world.
Frances Westley has published widely in the areas of strategic change and visionary leadership, and led the Dupont Canada—fostered think-tank on social innovation, based at McGill University’s Desautel Faculty of Management, where many of the ideas for this book were developed.

Brenda Zimmerman, a professor at the Schulich School of Business at York University, has been studying and writing about how complexity theory applies to organizations for twenty years.

Michael Quinn Patton is an independent organizational development consultant and has written five major books on the art and science of program evaluation.
“Getting to Maybe addresses making big, significant change actually happen. It is thoughtful, insightful, sobering and inspirational. The ideas articulated are new and practical. Anyone from the business, government or not-for-profit world who wants to understand change better, and change the way things are, should read this book.”
—Courtney Pratt, chairman of Stelco