To Repair a Broken World: The Life of Henrietta Szold, Founder of Hadassah (Hardcover) 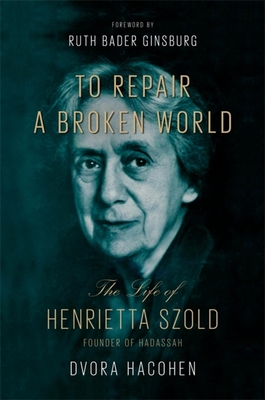 To Repair a Broken World: The Life of Henrietta Szold, Founder of Hadassah (Hardcover)

The authoritative biography of Henrietta Szold, founder of Hadassah, introduces a new generation to a remarkable leader who fought for women's rights and the poor.

Born in Baltimore in 1860, Henrietta Szold was driven from a young age by the mission captured in the concept of tikkun olam, "repair of the world." Herself the child of immigrants, she established a night school, open to all faiths, to teach English to Russian Jews in her hometown. She became the first woman to study at the Jewish Theological Seminary, and was the first editor for the Jewish Publication Society. In 1912 she founded Hadassah, the international women's organization dedicated to humanitarian work and community building. A passionate Zionist, Szold was troubled by the Jewish-Arab conflict in Palestine, to which she sought a peaceful and equitable solution for all. Noted Israeli historian Dvora Hacohen captures the dramatic life of this remarkable woman. Long before anyone had heard of intersectionality, Szold maintained that her many political commitments were inseparable. She fought relentlessly for women's place in Judaism and for health and educational networks in Mandate Palestine. As a global citizen, she championed American pacifism. Hacohen also offers a penetrating look into Szold's personal world, revealing for the first time the psychogenic blindness that afflicted her as the result of a harrowing breakup with a famous Talmudic scholar. Based on letters and personal diaries, many previously unpublished, as well as thousands of archival documents scattered across three continents, To Repair a Broken World provides a wide-ranging portrait of a woman who devoted herself to helping the disadvantaged and building a future free of need.