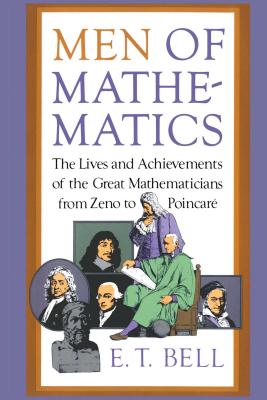 
Usually Ships in 1-5 Days
From one of the greatest minds in contemporary mathematics, Professor E.T. Bell, comes a witty, accessible, and fascinating look at the beautiful craft and enthralling history of mathematics.

Men of Mathematics provides a rich account of major mathematical milestones, from the geometry of the Greeks through Newton’s calculus, and on to the laws of probability, symbolic logic, and the fourth dimension. Bell breaks down this majestic history of ideas into a series of engrossing biographies of the great mathematicians who made progress possible—and who also led intriguing, complicated, and often surprisingly entertaining lives.

Never pedantic or dense, Bell writes with clarity and simplicity to distill great mathematical concepts into their most understandable forms for the curious everyday reader. Anyone with an interest in math may learn from these rich lessons, an advanced degree or extensive research is never necessary.
E.T. Bell was the former President of the Mathematical Association of America and a former Vice President of the American Mathematical Society of the American Association for the Advancement of Science. He won the Bôcher Prize of the American Mathematical Society for his research work. His twelve published books include The Purple Sapphire (1924), Algebraic Arithmetic (1927), Debunking Science, and Queen of the Sciences (1931), Numerology (1933), and The Search for Truth (1934).

Dr. Bell died in December 1960, just before the publication of his latest book, The Last Problem.
Bertrand Russell Professor Bell has done his work well....Any [one] engaged in learning mathematics will profit by reading him, since he humanizes the subject and helps to a realization of the historical environment.

Nature Professor E.T. Bell has written a fascinating book. The amount of biographical details and of mathematics that he has compressed into a volume of 600 pages is extraordinary...he carries the reader along; he whets the appetite.