Conquest: Cortes, Montezuma, and the Fall of Old Mexico (Paperback) 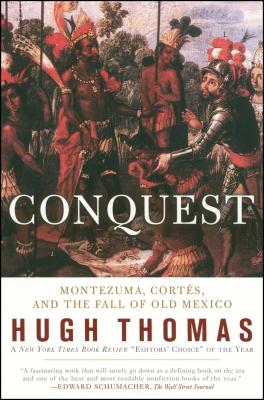 Conquest: Cortes, Montezuma, and the Fall of Old Mexico (Paperback)


Usually Ships in 1-5 Days
Drawing on newly discovered sources and writing with brilliance, drama, and profound historical insight, Hugh Thomas presents an engrossing narrative of one of the most significant events of Western history.

Ringing with the fury of two great empires locked in an epic battle, Conquest captures in extraordinary detail the Mexican and Spanish civilizations and offers unprecedented in-depth portraits of the legendary opponents, Montezuma and Cortés. Conquest is an essential work of history from one of our most gifted historians.
Hugh Thomas is the author of The Spanish Civil War, Conquest, and many other books. A former Chairman of the Centre for Policy Studies (U.K.), he was made Lord Thomas of Swinnerton in 1981. He lives in London.
Edward Schumacher The Wall Street Journal A fascinating work that will surely go down as a defining book on the era and one of the best and most readable nonfiction books of the year.

Alfred MacAdam Newsday Conquest makes such exciting reading one forgets that these things actually happened. Hugh Thomas documents characters and events in as much detail as humanly conceivable....Monumental.

Christopher Lehmann-Haupt The New York Times So dramatic is the account in Mr. Thomas's telling, that...you almost don't want to give the story away....Compelling recounted.