Art Of Dramatic Writing: Its Basis in the Creative Interpretation of Human Motives (Paperback) 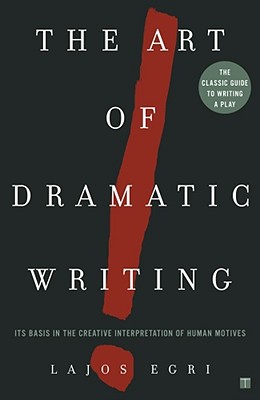 Art Of Dramatic Writing: Its Basis in the Creative Interpretation of Human Motives (Paperback)


Usually Ships in 1-5 Days
Learn the basic techniques every successful playwright knows! Amid the hundreds of "how-to" books out there, there have been very few which attempted to analyze the mysteries of play construction. Lajos Egri's classic, The Art of Dramatic Writing, does just that, with instruction that can be applied equally well to a short story, novel, or screenplay.

Examining a play from the inside out, Egri starts with the heart of any drama: its characters. All good dramatic writing hinges on people and their relationships, which serve to move the story forward and give it life, as well as an understanding of human motives—why people act the way that they do. Using examples from everything from William Shakespeare's Romeo and Juliet to Henrik Ibsen's A Doll's House, Egri shows how it is essential for the author to have a basic premise—a thesis, demonstrated in terms of human behavior—and to develop the dramatic conflict on the basis of that behavior.

Using Egri's ABCs of premise, character, and conflict, The Art of Dramatic Writing is a direct, jargon-free approach to the problem of achieving truth in writing.
Lajos Egri (1888-1967) was born in Hungary and founded the Egri School of Writing in New York City in the 1930s. In addition to writing books, he spent his life writing and directing plays in both the United States and Europe, as well as writing screenplays for the film industry.

Moss Hart I found Lajos Egri's book enormously interesting -- one of the best I have ever read.