Nehru and the Spirit of India (Hardcover) 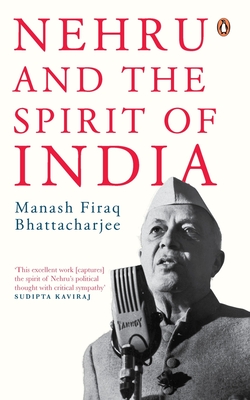 Nehru and the Spirit of India (Hardcover)

Jawaharlal Nehru was Plato's philosopher king, who 'discovered' an India that remains an undiscovered possibility. Nehru and the Spirit of India is a critical and nuanced perusal of his intellectual and political legacy.

From the 'politics of friendship' between Nehru and Sheikh Abdullah, Nehru's defense of secularism in the Constituent Assembly Debates, to what propelled Nehru to curb free speech in the First Amendment, Manash Firaq Bhattacharjee draws from political history to illuminate fierce debates in India today: Kashmir, the CAA, and hate speech. Be it contemporary events like the miracle of Ganesha drinking milk and the use of Vedic astrology in Chandrayaan-2, or the agonising suicide of a doctor, the author examines the fractured nature of Indian modernity, which Nehru had suggestively called a 'garb'. Bhattacharjee bolsters Nehru's view that India is enriched by the encounter of cultures and that we must not discard the past, but engage with it.

As a second-generation refugee, Bhattacharjee argues for a 'minoritarian' approach to national politics. Breaking ideological and disciplinary protocols, he compels us to learn from the insights of poets and thinkers. Lucidly written, this provocative book offers an original perspective on Nehru and Indian history.

Manash Firaq Bhattacharjee is a writer, political theorist and poet. He is the author of The Town Slowly Empties: On Life and Culture During Lockdown (2021), Looking for the Nation: Towards Another Idea of India (2018), and Ghalib's Tomb and Other Poems (2013). His writings, apart from regular contributions to The Wire, have appeared in the New York Times, Los Angeles Review of Books, Guernica, World Literature Today, the Economic and Political Weekly, The Hindu, the Indian Express and Outlook, among others. He has taught Lyric Poetry and Literary Journalism in Ambedkar University.