The True Account: A Novel of the Lewis & Clark & Kinneson Expeditions (Paperback) 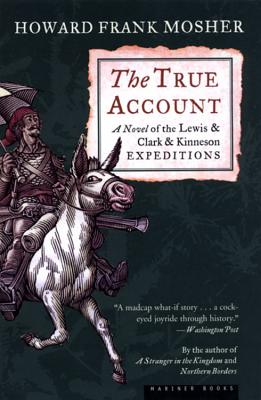 The True Account: A Novel of the Lewis & Clark & Kinneson Expeditions (Paperback)

Howard Frank Mosher introduces Private True Teague Kinneson, who sets out with his nephew, Ticonderoga, on an epic race to reach the Pacific before Meriwether Lewis and William Clark. Along the way True and Ti encounter Daniel Boone and his six-foot-two spinster daughter, Flame Danielle; fight and trick a renegade army out to stop Lewis’s expedition; invent baseball with the Nez Perce; hold a high-stakes rodeo with Sacagawea’s Shoshone relatives; and outwit True’s lifelong adversary, the Gentleman from Vermont, a.k.a. the devil himself.

HOWARD FRANK MOSHER is the author of ten books, including Waiting for Teddy Williams, The True Account, and A Stranger in the Kingdom, which, along with Disappearances, was corecipient of the New England Book Award for fiction. He lives in Vermont.

"Fun and fanciful with much to savor, Mosher's novel demonstrates a boundless imagination and a light comic touch." Publishers Weekly

"An erudite and absorbing tweak of the Great Exploration." Kirkus Reviews —