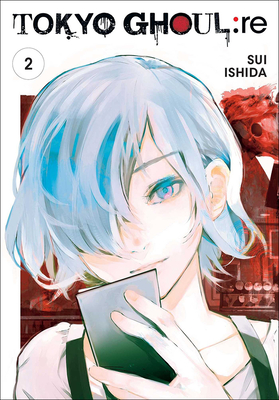 This is book number 2 in the Tokyo Ghoul: Re series.

In the world of Tokyo Ghoul, sometimes the only way to fight monsters is to become one... The Commission of Counter Ghoul is the only organization fighting the Ghoul menace, and they will use every tool at their disposal to protect humanity from its ultimate predator. Their newest weapon in this hidden war is an experimental procedure that implants human investigators with a Ghoul's Kagune, giving them Ghoul powers and abilities. But both the procedure and the newly formed Qs Squad are untested. Will they become heroes...or monsters? Haise Sasaki is in charge of turning the unruly members of the Qs Squad into an elite counter-Ghoul unit. But with everything to prove, will his team bite off more than it can chew when it starts investigating the mysterious organization Aogiri Tree? And can Haise be the mentor the Qs need when his forgotten past could come back to haunt him at any moment?
Sui Ishida was born in Fukuoka, Japan. He is the author of Tokyo Ghoul and several Tokyo Ghoul one-shots, including one that won him second place in the Weekly Young Jump 113th Grand Prix award in 2010. Tokyo Ghoul began serialization in Weekly Young Jump in 2011 and was adapted into an anime series in 2014.