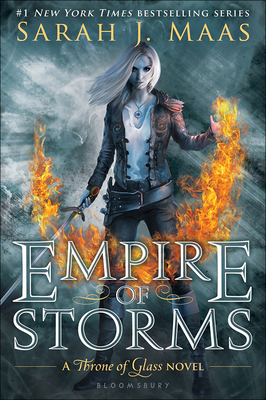 The long path to the throne has only just begun for Aelin Galathynius. Loyalties have been broken and bought, friends have been lost and gained, and those who possess magic find themselves at odds with those who don't.

With her heart sworn to the warrior-prince by her side, and her fealty pledged to the people she is determined to save, Aelin will delve into the depths of her power to protect those she loves. But as monsters emerge from the horrors of the past, and dark forces become poised to claim her world, the only chance for salvation will lie in a desperate quest that may mark the end of everything Aelin holds dear.

In this breathtaking fifth installment of the New York Times bestselling Throne of Glass series, Aelin will have to choose what--and who--to sacrifice if she's to keep the world of Erilea from breaking apart.

SARAH J. MAAS is the #1 New York Times bestselling author of the Throne of Glass series--Throne of Glass, Crown of Midnight, Heir of Fire, Queen of Shadows, and Empire of Storms--and the series' prequel, The Assassin's Blade; as well as The Throne of Glass Coloring Book, A Court of Thorns and Roses, A Court of Mist and Fury, and A Court of Wings and Ruin. A New York native, Sarah currently lives in Pennsylvania with her husband and dog. www.worldofsarahjmaas.comfacebook.com/throneofglassInstagram.com/[email protected]