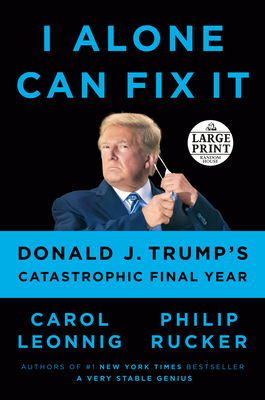 Reads like a thriller-but it happened! "On that same day, December 31, 2019, a curious email landed in the inboxes of top officials…it was a short alert from a small team of scientists at the CDC's outpost in Beijing".

— Randy
Carol Leonnig is a national investigative reporter at The Washington Post, where she has worked since 2000, covering Donald Trump’s presidency and previous administrations. She won the 2015 Pulitzer Prize for her reporting on security failures and misconduct inside the Secret Service. She also was part of the Post teams awarded Pulitzers in 2018, for reporting on Russia’s interference in the 2016 presidential election, and in 2014, for revealing the U.S. government’s secret, broad surveillance of Americans. Leonnig is an on-air contributor to NBC News and MSNBC and the author of Zero Fail: The Rise and Fall of the Secret Service.


Philip Rucker is the senior Washington correspondent at The Washington Post and led its coverage of President Trump and his administration as White House Bureau chief. He and a team of Post reporters won the Pulitzer Prize and George Polk Award for their reporting on Russia’s interference in the 2016 presidential election. In 2021, the White House Correspondents’ Association honored Rucker with the Aldo Beckman Award for overall excellence in White House coverage. Rucker joined the Post in 2005 and previously has covered Congress, the Obama White House, and the 2012 and 2016 presidential campaigns. He serves as an on-air political analyst for NBC News and MSNBC and graduated from Yale University with a degree in history.