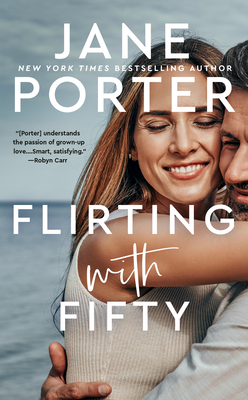 This is book number 1 in the Modern Love series.

A sexy and sparkling later-in-life contemporary romance about a woman who leaps out of her comfort zone and takes a chance on love by New York Times bestselling author Jane Porter.

Paige Newsom is finally at a place in her life where she’s comfortable. She loves her job as a college professor in Southern California, lives close enough to her mother to visit her regularly, and has three daughters who are flourishing in their own careers. Paige has no plans to upend her life again after her divorce eight years ago, but she’s about to embark on a new adventure: co-teaching a course that includes a three-week international field study.

Paige can think of a dozen reasons why she shouldn’t go, one being a dazzling Australian biologist who will be teaching alongside her. Professor Jack King is charismatic, a world traveler, and more like Indiana Jones than Indiana Jones, all of which unsettles Paige, who prides herself on being immune to any man’s charms. She isn’t looking for love, and it turns out, neither is he. But as the two co-professors lead the rigorous program together, first on campus, then in beautiful Tanzania, their biggest challenge will be working closely together while resisting the undeniable chemistry they feel when they’re with each other.
Jane Porter, the New York Times and USA Today bestselling author of 70 romances, holds an MA in Writing from the University of San Francisco and has been a finalist for the prestigious RITA award six times, winning in 2014 for Take Me, Cowboy. In 2008, Jane’s popular novel, Flirting With Forty, was made into a Lifetime movie starring Heather Locklear, and in 2021 two of her novels were turned into holiday movies for the new GAC Family channel. Jane lives in sunny California with her surfer husband, three sons, and three dogs.
“Two college professors get a second chance at love when they’re recruited to co-teach in this satisfying contemporary romance from Porter...Readers will appreciate Porter’s refreshing focus on middle-aged protagonists.”—Publishers Weekly

“Porter has few rivals when it comes to writing with grace and compassion about the emotional messiness of everyday living, not to mention her ability to effectively delineate the challenges, both personal and professional, that women face at every stage of life. With its brilliantly rendered characters (including two refreshingly older romantic protagonists) and quietly empowering storyline that celebrates the rewards of stepping outside your comfort zone, this romance is both timely and timeless."—Booklist