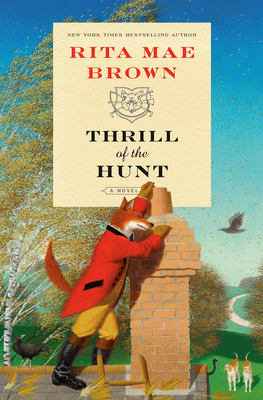 It’s the start of fox-hunting season and Sister is training a new generation of hounds in eager anticipation of Opening Hunt. But before they make it to that exciting day, several members of the hunt club receive ominous videos in which they appear to be doing scandalous, career-ending deeds. The videos are doctored, but does it matter? The unknown blackmailer promises to publish the clips if they don’t get paid, and even the most upstanding citizen can be brought down by the court of public opinion.

While Sister and her friends try to unmask the dastardly mind behind the videos, mysteries abound in their beautiful Blue Ridge Mountain town home. Two men die, apparently by suicide, shocking a community that never saw their deaths coming. And rumors abound that Old Paradise, the estate being lovingly restored by Crawford Howard, houses a secret stash of gold from its original owner. Does someone want the treasure badly enough to kill for?

Sister and her fellow Jefferson Hunt Club members, including friends both two- and four-legged, are on the case—and with any luck, they’ll catch the criminals before the first horn sounds on opening day.
Rita Mae Brown is the bestselling author of the Sneaky Pie Brown series; the Sister Jane series; the Runnymede novels, including Six of One and Cakewalk; A Nose for Justice and Murder Unleashed; Rubyfruit Jungle; In Her Day; and many other books. An Emmy-nominated screenwriter and poet, Brown lives in Afton, Virginia, and is a Master of Foxhounds.

Praise for the mysteries of Rita Mae Brown

“Jane ‘Sister’ Arnold . . . and her friends are now in their sixties and early seventies, but they remain as spry as ever. . . . Animal lovers and those curious about the elite world of fox hunting will be rewarded.”—Publishers Weekly

“The richness of this novel rests in the varied characters. . . . The descriptions of the countryside are so vivid that it makes one want to take a trip there and bring your horse.”—Mid-South Horse Review

“With deep and broad knowledge of the sport, the area and the people and animals who inhabit it, [Brown] infuses Homeward Hound—and the entire series—with unmatched authenticity, Southern charm, beloved characters and engaging storylines.”—The Free Lance–Star

“Without a doubt, Crazy Like a Fox is [Brown’s] best mystery to date . . . and earns top marks for everything from plot to pace to charcters.”—In & Around Horse Country