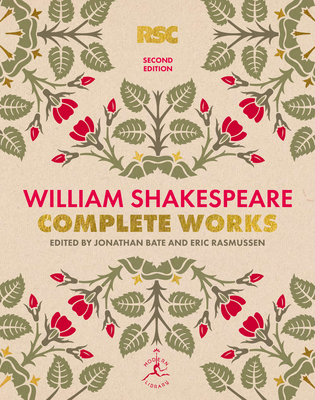 Skillfully assembled by Shakespeare’s fellow actors in 1623, the First Folio was the original Complete Works—arguably the most important literary work in the English language. But starting with Nicholas Rowe in 1709 and continuing to the present day, Shakespeare editors have mixed Folio and Quarto texts, gradually corrupting the original Complete Works with errors and conflated textual variations.

The second edition of the Complete Works features annotations and commentary from Jonathan Bate and Eric Rasmussen—two of today’s preeminent Shakespeare scholars—as well as cutting-edge textual design, on-page glossaries for contemporary readers, stage directions from RSC directors, a sixteen-page insert of photographs from RSC production shorts, a timeline of the plays and poems, and family trees for the Histories.

Combining innovative scholarship with brilliant commentary and textual analysis that emphasizes performance history and values, this landmark edition is indispensable to students, theater professionals, and general readers alike.
William Shakespeare (1564–1616), often referred to as the Bard of Avon, was a poet, playwright, and actor who is widely regarded as one of the most influential writers in the history of the English language. Shakespeare’s vast body of work includes comedic, tragic, and historical plays; poems; and 154 sonnets. His dramatic works have been translated into every major language and are performed more often than those of any other playwright.

Eric Rasmussen is professor of English and director of graduate study at the University of Nevada. He is a co-editor of the Norton Anthology of English Renaissance Drama and of the forthcoming New Variorum Shakespeare edition of Hamlet. He has edited a number of works for the Arden Shakespeare series, Oxford's World's Classics, and the Revels Plays series, and is the general textual editor of the Internet Shakespeare Editions Project.

The Royal Shakespeare Company is a world-renowned ensemble theatre company in London and Stratford, dedicated to bringing Shakespeare and his contemporaries to a modern audience.

“There may never be an absolutely definitive collection of Shakespeare’s plays, but this may be as close as we ever come. Clear, user-friendly, and meticulous, this is the edition we all need.”—David Tennant

“All of humanity in all of its complexity is contained within these plays, so much so that it’s hard to imagine that Shakespeare will ever be surpassed as the world’s greatest and most beloved playwright. It’s therefore fitting to have this edition that displays his work’s continuing relevance and resonance to his ongoing audience.”—David Oyelowo

“This is a glorious edition of one of the world’s most important books. It’s the essential reference book for anyone who’s ever been in love, felt jealousy, fear, hatred, or desire. All human life is here—and every home should have one.”—Dame Judi Dench, in praise of the first edition