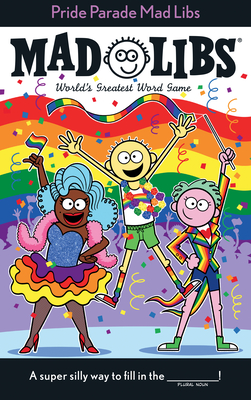 
Email or call for price
Grab your COLOR flag and wave it proudly, because Mad Libs is leading the parade in honor of Pride!

Get ready to strut your stuff, because it's time to celebrate with Pride Parade Mad Libs! This fabulous new Mad Libs features 21 hilarious fill-in-the-blank stories all about the excitement of Pride, the history of Stonewall, and embracing being LGBTQIA+. This is one parade you won't want to miss.
Brandon T. Snider has authored the bestselling Dark Knight Manual as well as books about some of pop culture's most recognizable icons such as Superman, Spider-Man, and the Muppets. His most recent work has been writing books for Cartoon Network's hit shows Adventure Time and Regular Show. Brandon lives in New York City where he's a member of both SAG-AFTRA and the Writers Guild of America.