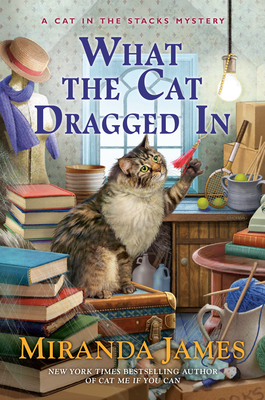 
Usually Ships in 1-5 Days
Librarian Charlie Harris and his faithful feline companion, Diesel, have inherited Charlie’s grandfather’s house, along with a deadly legacy: a decades-old crime scene, in this all-new mystery in the New York Times bestselling Cat in the Stacks series.

Charlie has always believed that his grandfather had sold his house to his longtime tenant, Martin Hale. So when Martin dies, Charlie is surprised to discover the house was not left to Martin but instead belongs to Charlie. As he and Diesel check out the house he remembers fondly from his childhood, he is pleasantly surprised that it is in better condition than expected. That is, until they find a literal skeleton in a closet.

While the sheriff’s department investigates the mysterious remains, Charlie digs deeper into the past for clues to the identity of the bones and why they are there. But the cold case heats up quickly when Martin’s grandson is found dead on the farm.

As Charlie delves into his own family history, he encounters many people who might have been motivated to take a life. But Charlie and Diesel know that things are not always what they seem, and that secrets seemingly lost to time have a way of finding their way back to haunt the present.
Miranda James is the New York Times bestselling author of the Cat in the Stacks Mysteries and the Southern Ladies Mysteries.