The Huguenot Family of Pierre Peter Poitevint: His Ascendants and Descendants from France to the Carolinas and Beyond (Hardcover) 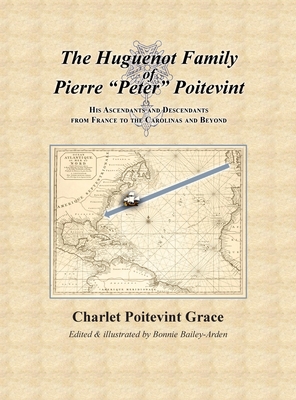 The Huguenot Family of Pierre Peter Poitevint: His Ascendants and Descendants from France to the Carolinas and Beyond (Hardcover)

WITH the aid of archived documents, early maps, and clarifying family charts, The Huguenot Family of Pierre "Peter" Poitevint combines genealogical research and newsy story-telling to present a family chronicle that anyone with an interest in Southern history can appreciate. Much more than a catalogue of names and dates showing who married whom and the names of their children, it is a narrative of how our ancestors conducted themselves in the context of the times in which they lived.

The author's expansive viewpoint of family, which includes in-laws and their relatives, has produced a rich resource of names for researchers with ancestors from the early Carolina colonies as well as those who migrated from there to parts of Georgia, Florida and Texas. Included with the comprehensive index is a separate listing of enslaved persons, whose names are sorted according to their owners' names to help African-American researchers trace their roots.

Readers drawn to puzzle-solving will no doubt enjoy the descriptions of how the book's author and editor went about untangling the identities of multiple individuals with the same names (an exasperatingly common practice among families whose children, throughout multiple generations, named their offspring after their own parents, aunts and uncles). In addition, the author's research and analysis enabled her to correct several misconceptions/mistaken identities that, through unchallenged repetition and duplication, have become widely accepted as factual.