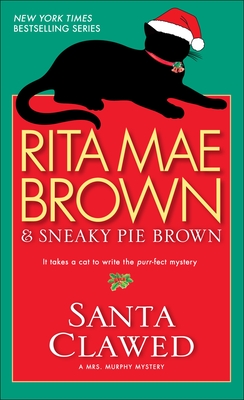 This is book number 17 in the Mrs. Murphy series.

As Harry well knows, there’s hardly a place on earth cozier than Crozet, Virginia, at Christmastime. Snowflakes, carolers, it’s all picture-perfect until Harry and her husband, Fair, find the tree they’ve chosen grimly decorated with a corpse. The tree farm is run by the Brothers of Love, a semimonastic organization whose members live atop the scenic Blue Ridge Mountains. Now, as the season grows merrier, a murderer is growing bolder. One by one, prominent men of Crozet are being crossed off Christmas shopping lists and added to the morgue. And if Harry and her four-legged helpers aren’t very good–and very careful–this Christmas will be her last.
Rita Mae Brown is the bestselling author of the Sneaky Pie Brown series; the Sister Jane series; A Nose for Justice and Murder Unleashed; Rubyfruit Jungle; In Her Day; and Six of One, as well as several other novels. An Emmy-nominated screenwriter and a poet, Brown lives in Afton, Virginia.

“Reading a Mrs. Murphy mystery is like eating a potato chip. You always go back for one more…A deserving bestselling series.”—Midwest Book Review

“[Rita Mae Brown is] a master of the cozy cat genre.”—Publishers Weekly