Pawing Through the Past: A Mrs. Murphy Mystery (Mass Market) 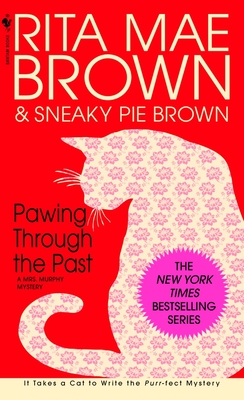 Pawing Through the Past: A Mrs. Murphy Mystery (Mass Market)

This is book number 8 in the Mrs. Murphy series.

Each member of the class of 1980 has received the letter. Mary Minor "Harry" Haristeen, who is on the organizing committee for Crozet High's twentieth reunion, decides to take it as a compliment. Others think it's a joke.

But Mrs. Murphy senses trouble. And the sly tiger cat is soon proven right ... when the class womanizer turns up dead with a bullet between his eyes. Then another note followed by another murder makes it clear that someone has waited twenty years to take revenge.

While Harry tries to piece together the puzzle, it's up to Mrs. Murphy and her animal pals to sniff out the truth. And there isn't much time. Mrs. Murphy is the first to realize that Harry has been chosen Most Likely to Die, and if she doesn't hurry, Crozet High's twentieth reunion could be Harry's last.
Rita Mae Brown is the bestselling author of the Sneaky Pie Brown series; the Sister Jane series; A Nose for Justice and Murder Unleashed; Rubyfruit Jungle; In Her Day; and Six of One, as well as several other novels. An Emmy-nominated screenwriter and a poet, Brown lives in Afton, Virginia.

"Mrs. Murphy is a cat who detects her way into our hearts."
-- San Francisco Chronicle Book Review