Wish You Were Here: A Mrs. Murphy Mystery (Mass Market) 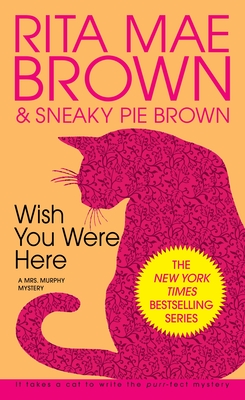 Wish You Were Here: A Mrs. Murphy Mystery (Mass Market)

This is book number 1 in the Mrs. Murphy series.

Curiosity just might be the death of Mrs. Murphy--and her human companion, Mary Minor "Harry" Haristeen.  Small towns are like families:  Everyone lives very close together. . .and everyone keeps secrets.  Crozet, Virginia, is a typical small town-until its secrets explode into murder.  Crozet's thirty-something post-mistress, Mary Minor "Harry" Haristeen, has a tiger cat (Mrs. Murphy) and a Welsh Corgi (Tucker), a pending divorce, and a bad habit of reading postcards not addressed to her.  When Crozet's citizens start turning up murdered, Harry remembers that each received a card with a tombstone on the front and the message "Wish you were here" on the back.  Intent on protecting their human friend, Mrs. Murphy and Tucker begin to scent out clues.  Meanwhile, Harry is conducting her own investigation, unaware her pets are one step ahead of her.  If only Mrs. Murphy could alert her somehow, Harry could uncover the culprit before the murder occurs--and before Harry finds herself on the killer's mailing list.
Rita Mae Brown is the bestselling author of the Sneaky Pie Brown series; the Sister Jane series; A Nose for Justice and Murder Unleashed; Rubyfruit Jungle; In Her Day; and Six of One, as well as several other novels. An Emmy-nominated screenwriter and a poet, Brown lives in Afton, Virginia.

Sneaky Pie Brown, a tiger cat born somewhere in Albemarle County, Virginia, was discovered by Rita Mae Brown at her local SPCA. They have collaborated on numerous Mrs. Murphy mysteries—in addition to Sneaky Pie’s Cookbook for Mystery Lovers and Sneaky Pie for President.
"It should delight cat fancier. . .sassy, silly, and plenty of fun."--The Baltimore Sun