A Taste for Red (Paperback) 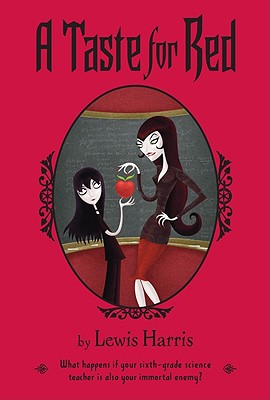 A Taste for Red (Paperback)

A sixth-grade Goth girl who thinks she’s a vampire encounters her greatest nemesis when she enrolls at Sunny Hill Middle School in this hilarious and entirely original take on the vampire genre for middle graders.

Svetlana Grimm has recently discovered she’s a vampire. The clues are all there: she can eat only red foods, has to sleep under the bed because of her heightened sensitivity to light and noise, and can read others’ thoughts. But this new discovery is making her transition from home-schooling to attending sixth grade at Sunny Hill Middle School that much more difficult. After all, what can she possibly have in common with those jellybean-eaters in her class? She prefers to watch them from afar in her hidden lair atop the Oak of Doom in her backyard.

But things get more interesting when Svetlana’s cruel yet beautiful science teacher, Ms. Larch, reads her thoughts. Svetlana is excited to have found another of her kind—until her new neighbor, The Bone Lady, fills her in on Ms. Larch's true identity and her own. What happens when your sixth-grade science teacher might also be your immortal enemy?

Lewis Harris has backpacked over 3,000 miles along the Appalachian Trail and hitchhiked to the Arctic Ocean. He's lived in the French Quarter of New Orleans, on a high mountain pass in Wyoming, and aboard a paddleboat on the Mississippi River. He's worked as a massage threrapist, a short-order cook, a room-service waiter, and a janitor. But he's happiest being a writer. He now lives in Florida, and this is his first book. You can visit him online at www.lewisharrisbooks.com.

“The snarky, clever mix of mystery, horror, and goth-girl humor results in a novel that will easily cross genre lines to reach a wide variety of readers.”—The Bulletin of the Center for Children's Books “[A] funny, pleasingly creepy debut. . . . With enough of a yuck- and suspense-quotient to appeal to boys and a smart, resourceful heroine whom girls can champion, this tale is just the ticket for readers not yet ready for Twilight.”—Shelf Awareness “Reluctant heroine Svetlana has plenty of personality and wit. . . and although Harris leaves the door open for sequels, his fast-paced debut stands on its own.”—Publishers Weekly  “In the glut of novels about vampires and other supernatural beings, it’s refreshing to find such a slim, sharp tale. . . . With concision and wit, Harris has great fun with Svetlana’s wry narration, the dastardliness of Ms. Larch, and Svetlana’s efforts to convince two nerdy boys to help combat a great force of evil. A tasty read indeed.”—Booklist  “[Svetlana’s] first-person narrative is fast-paced and witty, and her mild scorn for everything she encounters at school will appeal to angst-ridden tweens. Sure to be a crowd-pleaser.”—School Library Journal —