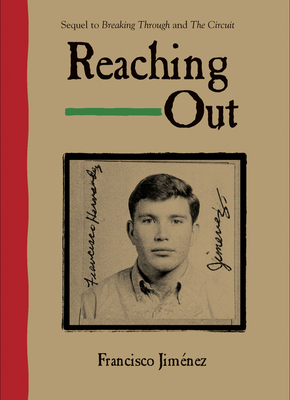 
Usually Ships in 1-5 Days
From the perspective of the young adult he was then, Francisco Jiménez describes the challenges he faced in his efforts to continue his education.
During his college years, the very family solidarity that allowed Francisco to survive as a child is tested. Not only must he leave his family behind when he goes to Santa Clara University, but while Francisco is there, his father abandons the family and returns to Mexico. This is the story of how Francisco coped with poverty, with his guilt over leaving his family financially strapped, with his self-doubt about succeeding academically, and with separation. Once again his telling is honest, true, and inspiring.
Francisco Jiménez emigrated from Tlaquepaque, Mexico, to California, where he worked for many years in the fields with his family. He received both his master’s degree and his Ph.D. from Columbia University and is now the chairman of the Modern Languages and Literature Department at Santa Clara University, the setting of much of his newest novel, Reaching Out. He is the Pura Belpre Honor winning author of The Circuit, Breaking Through, and La Mariposa. He is also the recipient of the John Steinbeck Award. He lives with his family in Santa Clara, California.

"[Jimenez] does a thorough job . . . of describing the difficulties, such as feeling unprepared and disadvantaged when compared to others, that some first-generation college students face . . . There are several kind-hearted mentors and benefactors . . . These gestures of kindness offer readers hope. This book is recommended for the library that already has the first two books on its shelf."--VOYA (3Q3P) "No one who reads these life stories will forget them. Jiménez reaches out to let us walk in his shoes, feel his pain and pride, joy and sorrow, regrets and hope. All three books should be required reading for Californians. Students of Mexican heritage will see themselves. The rest of us will better understand what it takes to make this journey. And we'll all be hanging on for the next book."--Sacramento Bee, Living Here section (pg. D3) "In this eloquent, transfixing account, Jimenez again achieves a masterful addition to the literature of the memoir."--Smithsonian Magazine, Best Books of the Year 2008 —