Insurgency: How Republicans Lost Their Party and Got Everything They Ever Wanted (Hardcover) 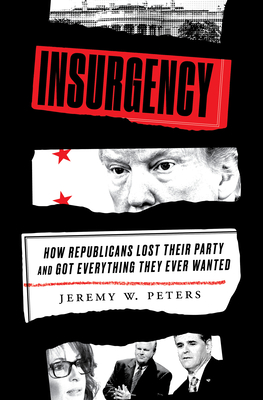 Insurgency: How Republicans Lost Their Party and Got Everything They Ever Wanted (Hardcover)


Usually Ships in 1-5 Days
NEW YORK TIMES BOOK REVIEW EDITORS’ CHOICE • How did the party of Lincoln become the party of Trump? From an acclaimed political reporter for The New York Times comes the definitive story of the mutiny that shattered American politics.

“A bracing account of how the party of Lincoln and Reagan was hijacked by gadflies and grifters who reshaped their movement into becoming an anti-democratic cancer that attacked the U.S. Capitol.”—Joe Scarborough

An epic narrative chronicling the fracturing of the Republican Party, Jeremy Peters’s Insurgency is the story of a party establishment that believed it could control the dark energy it helped foment—right up until it suddenly couldn’t. How, Peters asks, did conservative values that Republicans claimed to cherish, like small government, fiscal responsibility, and morality in public service, get completely eroded as an unshakable faith in Donald Trump grew to define the party?

The answer is a tale traced across three decades—with new reporting and firsthand accounts from the people who were there—of populist uprisings that destabilized the party. The signs of conflict were plainly evident for anyone who cared to look. After Barack Obama’s election convinced many Republicans that they faced an existential demographics crossroads, many believed the only way to save the party was to create a more inclusive and diverse coalition. But party leaders underestimated the energy and popular appeal of those who would pull the party in the opposite direction. They failed to see how the right-wing media they hailed as truth-telling was warping the reality in which their voters lived. And they did not understand the complicated moral framework by which many conservatives would view Trump, leading evangelicals and one-issue voters to shed Republican orthodoxy if it delivered a Supreme Court that would undo Roe v. Wade.

In this sweeping history, Peters details key junctures and episodes to unfurl the story of a revolution from within. Its architects had little interest in the America of the new century but a deep understanding of the iron will of a shrinking minority. With Trump as their polestar, their gamble paid greater dividends than they’d ever imagined, extending the life of far-right conservatism in United States domestic policy into the next half century.
Jeremy W. Peters has been a correspondent for The New York Times for more than fifteen years and is also a political contributor for MSNBC.
“[A] spirited new history . . . The outlines of the Republicans’ hard-right turn are by now largely familiar. What distinguishes Insurgency is its blend of political acuity and behind-the-scenes intrigue. . . . Peters is a fluid and engaging writer, and as the narrative of Insurgency unfolds and Trump inevitably, irresistibly, assumes center stage, you almost can’t help admiring—as Bannon did—the candidate’s raw, demagogic genius.”—The New York Times

“Insurgency is persuasive in suggesting that the long-term transformation of the Republican Party is one in which a style of politics has overpowered, and then suffocated, any remnant of its substance.”—The Washington Post

“Highly readable . . . From 2016 to the Capitol riot, Jeremy Peters delivers a meticulously reported and extremely worrying tale of how and why the U.S. came to this. . . . Peters chronicles how the party of Lincoln and Reagan morphed into Trump’s own fiefdom. He writes with a keen eye and sharp pen. . . . His book is chilling.”—The Guardian

“Peters seems to have been present and reporting at every significant turn in the Republican road, watching the party gradually shed its country club image in favor of pickup trucks and gun racks.”—NPR

“Jeremy Peters is one of the nation’s best reporters, with an unrivaled eye for detail and the often-hard-to-see dynamics driving political movements and key players. He tracks Republican politics like a detective, taking years to discover revealing clues in dark corners and to meet with critical witnesses. He follows the story, calmly and relentlessly, and reveals what is really happening.”—Robert Costa, bestselling co-author of Peril

“Insurgency is a compelling investigation and a groundbreaking political narrative filled with fascinating original reporting on how the Republican Party evolved over the years to become the party of Donald Trump. . . . A must-read by a first-rate reporter for anyone who cares about politics and the future of our democratic system.”—Andrea Mitchell

“Peters has written the definitive account of the devolution of the GOP into full-metal Trumpism. In searing detail—including the fateful role of Sarah Palin—he documents how Trump tapped into the suspicion, anxiety, anger, and cultural grievance that had been festering for years on the right.”—Charles Sykes, founder of The Bulwark and author of How the Right Lost Its Mind