Tasty Every Day: All of the Flavor, None of the Fuss (An Official Tasty Cookbook) (Hardcover) 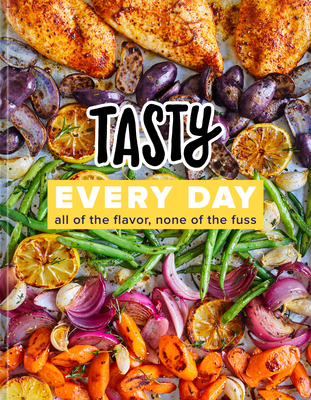 Tasty Every Day: All of the Flavor, None of the Fuss (An Official Tasty Cookbook) (Hardcover)


Usually Ships in 1-5 Days
Meal prep, one pot, no cook, slow cooker or Instant Pot®—BuzzFeed’s Tasty has something for everyone with 75 time-saving, taste-tested recipes that make cooking easy and fun.

We know you’re busy, so we'll make it quick. Or, actually, you’ll make it quick. With easy-clean-up one-pot wonders like Spaghetti with Caramelized Lemon, Shrimp, and Parsley and hands-off slow cooker life-savers like Shredded Chicken Tacos, you’ll get food on the table fast and effortlessly. Only have five ingredients? No problem—turn them into craveable Cauliflower Mac ’n’ Cheese. Wouldn’t it be magic if you could cook once and eat for the week? Spoiler alert: Meal prep makes it possible. Whether you’re short on time, ingredients, clean pans, motivation, or all of the above, there is food here for you. Mealtime can and should be Tasty every single day.
Tasty is the world’s largest social food network, reaching more than 500 million people around the globe with its signature fun, easy, and delicious video recipes. The brand is focused on making cooking practical and accessible for beginner cooks and expert chefs alike. Launched in 2015, Tasty has attracted more than sixty-five billion video views and is the biggest franchise on Facebook, reaching one in four users every month. It has studios in Los Angeles, New York, London, Paris, Berlin, Mexico City, and São Paulo, and a full product line including cookbooks, a smart appliance, and a mobile app.