Boying Up: How to Be Brave, Bold and Brilliant (Paperback) 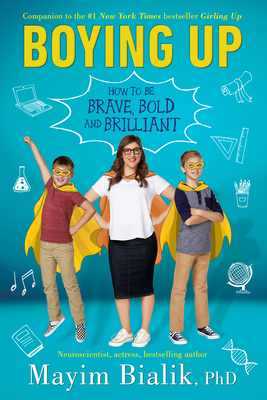 Boying Up: How to Be Brave, Bold and Brilliant (Paperback)


Email or call for price
Mayim Bialik is best known as Amy Farrah Fowler on America's #1 comedy, The Big Bang Theory, a role for which she has received four Emmy nominations and a Critics' Choice Award. She also starred in the early-1990s sitcom Blossom. Mayim earned a BS from UCLA in Neuroscience and Hebrew and Jewish studies, and went on to earn a Ph.D. from UCLA in Neuroscience. She is the author of the #1 New York Times bestseller, Girling Up, as well as Beyond the Sling, and Mayim's Vegan Table.

Mayim founded GrokNation.com in 2015 as a platform for sharing her writing on everything from religious observance and modesty to women's issues to parenting to politics. She seeks to present herself as a normal, imperfect mom trying to make everything run smoothly in a world that often feels out of her control. Mayim lives in Los Angeles with her brave, bold and brilliant sons.

Praise for Boying Up:

"A matter-of-fact mirror that reflects reality and respect, not bewildered embarrassment." --Kirkus Reviews

"Boying Up hits all the hot spots and should be included in tween and teen library collections." --VOYA