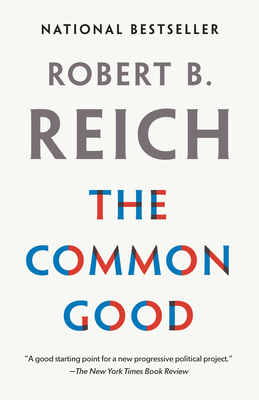 By Robert B. Reich


Usually Ships in 1-5 Days
Robert B. Reich makes a powerful case for the expansion of America’s moral imagination. Rooting his argument in common sense and everyday reality, he demonstrates that a common good constitutes the very essence of any society or nation. Societies, he says, undergo virtuous cycles that reinforce the common good as well as vicious cycles that undermine it, one of which America has been experiencing for the past five decades. This process can and must be reversed. But first we need to weigh the moral obligations of citizenship and carefully consider how we relate to honor, shame, patriotism, truth, and the meaning of leadership.

Powerful, urgent, and utterly vital, this is a heartfelt missive from one of our foremost political thinkers.
ROBERT B. REICH is Chancellor's Professor of Public Policy at the Goldman School of Public Policy at the University of California, Berkeley. He has served in three national administrations and has written fifteen books, including The Work of Nations, Saving Capitalism, Supercapitalism, and Locked in the Cabinet. His articles have appeared in The New Yorker, The Atlantic, The New York Times, The Washington Post, and The Wall Street Journal. He is co-creator of the award-winning documentary Inequality for All and of the Netflix documentary Saving Capitalism, and is co-founder of Inequality Media. He lives in Berkeley and blogs at robertreich.org.

“Against the grain of much liberal thinking . . . Reich’s proposals would make a good starting point for a new progressive political project.” —Michael J. Sandel, The New York Times Book Review

“Very timely . . . Reich’s work is an important call for reform that should appeal to a wide audience disaffected with the status quo.” —Library Journal (starred review)