This Star Won't Go Out: The Life and Words of Esther Grace Earl (Hardcover) 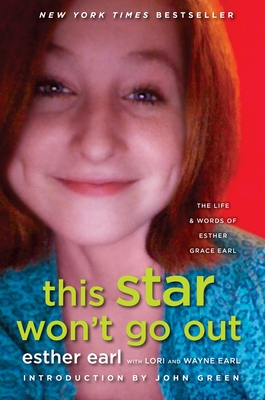 This Star Won't Go Out: The Life and Words of Esther Grace Earl (Hardcover)

“This moving read will have you reaching for the tissues and smiling with delight….Stunningly alive on the page, Esther shows that sometimes the true meaning of life—helping and loving others—can be found even when bravely facing death.” –People Magazine, 4 stars

In full color and illustrated with art and photographs, this is a collection of the journals, fiction, letters, and sketches of the late Esther Grace Earl, who passed away in 2010 at the age of 16. Essays by family and friends help to tell Esther’s story along with an introduction by award-winning author John Green who dedicated his #1 bestselling novel The Fault in Our Stars to her.

Learn more about Esther at tswgobook.tumblr.com.
Wayne and Lori Earl are the parents of the late Esther Earl and founders of the nonprofit organization This Star Won’t Go Out (tswgo.org), whose mission it is to financially assist families struggling through the journey of a child living with cancer. To date, TSWGO has given away more than $130,000 to families in need.

Reviews for This Star Won't Go Out:

"Just so you can’t say we didn’t warn you, This Star Won’t Go Out will make you sob (unless you don’t have a soul). But it will also make you smile, as one of those rare books that will change the way you look at the world. The true story of Esther, a teen with cancer, this book is a compilation of her essays, short fiction, journal entries and family photos. You might not expect a 16-year-old with a terminal illness to be funny, but Esther is cleverly so while eschewing bitterness.

Author John Green got to know Esther after meeting her at a Harry Potter convention, and they formed a meaningful friendship. So meaningful, in fact, that he dedicated The Fault in Our Stars to her and wrote the foreword to this book. Just released, This Star Won’t Go Out is one book that will stick with you long after you finish it."
—Metro New York