On Capitol Hill: The Struggle to Reform Congress and Its Consequences, 1948-2000 (Paperback) 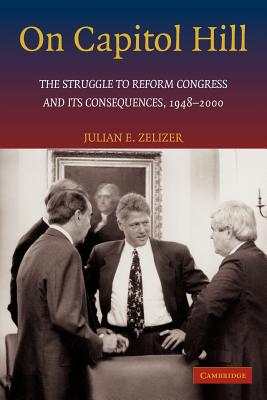 On Capitol Hill: The Struggle to Reform Congress and Its Consequences, 1948-2000 (Paperback)


Usually Ships in 1-5 Days
(This book cannot be returned.)
Thirty years after the Watergate Babies promised to end corruption in Washington, Julian Zelizer offers the first major history of the demise of the committee-era Congress and the rise of the contemporary legislative branch. Based on research in more than a hundred archival collections, this book tackles one of the most enduring political challenges in America: barring a wholesale revolution, how can we improve our representative democracy so as best to fulfill the promises of the Constitution? Whereas popular accounts suggest that major scandals or legislation can transform government institutions, Zelizer shows that reform is messy, slow, and involves many institutions coming together at the right time. The short period of reform in the 1970s--one that rivaled the Progressive Era--revolved around a coalition that had worked for decades, a slow reconfiguration of the relationship among political institutions, shifts in the national culture, and the ability of reformers to take advantage of scandals and elections. Zelizer presents a new look at the origins of the partisanship and scandal warfare that characterize today's politics. The book also offers a warning to the next generation of reformers by showing how a new political environment can radically transform the political impact of government reforms, as occurred when the conservative movement--during its rise to power in recent decades--took advantage of reforms that had ended the committee era. Julian Zelizer teaches political history at Boston University. His book, Taxing America: Wilbur D. Mills, Congress, and the State, 1945-1975 (Cambridge, 1999), was awarded the Organization of American Historian's 1998 D.B. Hardeman Prize. He is the co-editor of The Democratic Experiment (Princeton University Press, 2003) and the editor of The American Congress: The Building of Democracy (Houghton-Mifflin, 2005).